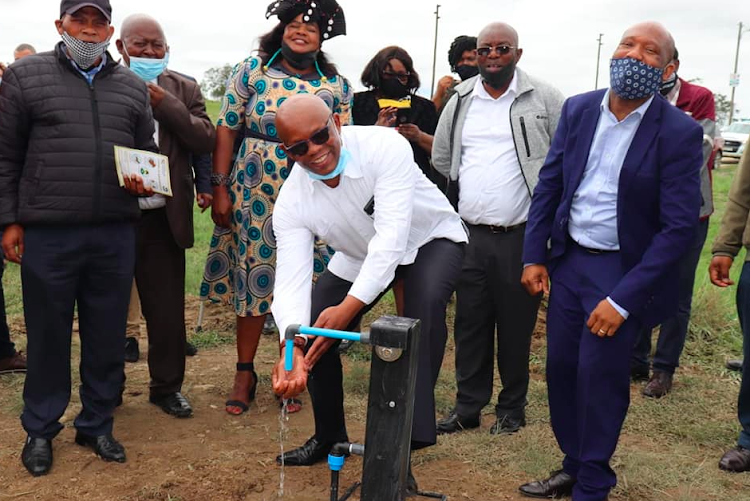 One SA leader Mmusi Maimane and radio personality Redi Tlhabi have joined dozens of South Africans in reacting to the unveiling of foot-operated taps in the Eastern Cape.

The 200 foot-operated taps and eight washing basins were unveiled at the weekend and handed over by the MEC for the department of co-operative governance & traditional affairs, Xolile Nqatha, to the Amahlathi and Enoch Mgijima municipalities.

According to the department, the hand over was a partnership between the Development Bank of Southern Africa (DBSA), the National Business Initiative (NBI), the department of water & sanitation, and the Grundfos Foundation.

Nqatha said the partnership was “to realise a better life for all the people of the province”.

“Ours is to harness the coalition of the willing to build the South Africa we want, especially under the threat of Covid-19 pandemic. The equipment, we welcome it to save lives and protect livelihoods,” he said.

“The equipment has been tested to ensure the durability of the technology. It also requires minimal maintenance and provides water at an optimum flow level, which will provide a safe hygiene solution for decades to come,” she said.

The department said the handwash facility has a limited surface area to prevent contamination, making it an ideal solution during and beyond the Covid-19 pandemic.

“The unit’s longevity makes it suitable for hygiene access at schools, clinics, informal settlements and anywhere where safe public handwashing is needed.

“Hundreds of additional foot-operated water taps and public handwashing facilities will be installed in identified densely populated communities of the Eastern Cape Province,” the department said.

Many were up in arms after pictures of the water taps in the province surfaced on social media, with Maimane calling the unveiling “embarrassing”.

One small tap for man, one giant leap for the ANC. https://t.co/ejw40MvTj3

am sure millions of Rands were paid for that tap which cost less than R2k ANC💔
African National Criminals 😈 https://t.co/JwnZiN9ZQ1

I can't believe but all the ANC is capable of celebrating is unveiling a tap. God help us from these people.

Grown ass ANC men in the EC. These are people’s fathers.... shamelessly unveiling a tap in a community in the EC. Mandela must be turning in his grave. This is sad. Very sad. #BlackLivesMatter Vaal #GetYourKicks pic.twitter.com/uaAgUo9sIQ