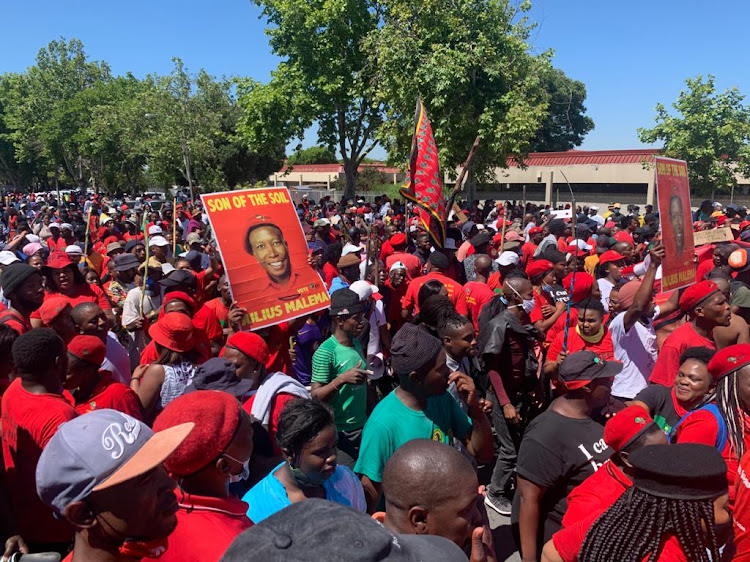 Hundreds of EFF supporters assembled on November 20 for a march on Brackenfell High.
Image: Esa Alexander

Allegations of racism at Brackenfell High School in Cape Town returned to the spotlight on Friday as hundreds of EFF members marched on the school.

Approaching midday, the podium erected by the EFF outside the school gate was empty and quiet because the crowd was much larger than the 100 allowed by a City of Cape Town permit.

Several police lines were set up between the protesters, who marched up Paradys Road in Brackenfell East as the crowd grew ever larger. Police used stun grenades and water cannons to disperse the crowd.

More EFF supporters arrive - some of them Manchester United fans - as the crowd grows to above 700 here in Brackenfell as part of the planned protest where Malema is planning to speak later today. #EFFRedFriday @TimesLIVE @SunTimesDaily pic.twitter.com/RgyVPPJHpW

Protest leaders tried to negotiate with police for the marchers to be allowed through while marshals clad in full camouflage tried to keep discipline among the crowd.

Several members of the #JozitoStellenbosch group, who advocate for the expulsion of whites from SA,  joined the protest.

Earlier this year, the group clashed with police in Kayamandi after attempting to march on Stellenbosch to occupy shops and commercial buildings at a time when protest action was prohibited under Covid-19 regulations.

Jack Markovitz, EFF member outside the Brackenfell High School says that the situation in Brackenfell is the same like every single white neighbourhood in the country, racism is instill in the bones of these people. @TimesLIVE @SowetanLIVE @EFFWesternCape_ @EFFSouthAfrica pic.twitter.com/448oXMVomB

On the other side of the school grounds, a group of white residents gathered in reaction to what they perceived as a threat posed to the school their children attend.

Although a matric exam was taking place at a different location on Friday, they said they would be the last line of defence if the police failed to hold the line.

The group was smaller than during the recent confrontation with EFF members after the school admitted issues around alleged racism and committed itself to change in cooperation with parents and pupils of colour.

Present among the small group of Brackenfell residents on Friday were a few people wearing images apparently depicting the old SA flag.

Also represented was the Cape Party, whose mission is the secession of the Western Cape. Police asked the group to disperse because they did not have a permit to gather.

#BrackenFellHigh: Locals in Brackenfell tell EFF members to not put their mobile toilets where they will be standing/gathered.

[LIVE] Police use stun grenades, rubber bullets and water cannons of EFF protestors. Tune into #Newzroom405 for live visuals of the #EFFInBrackenfell. pic.twitter.com/dN7niXvTLg

We are now marching to Brackenfell High School.