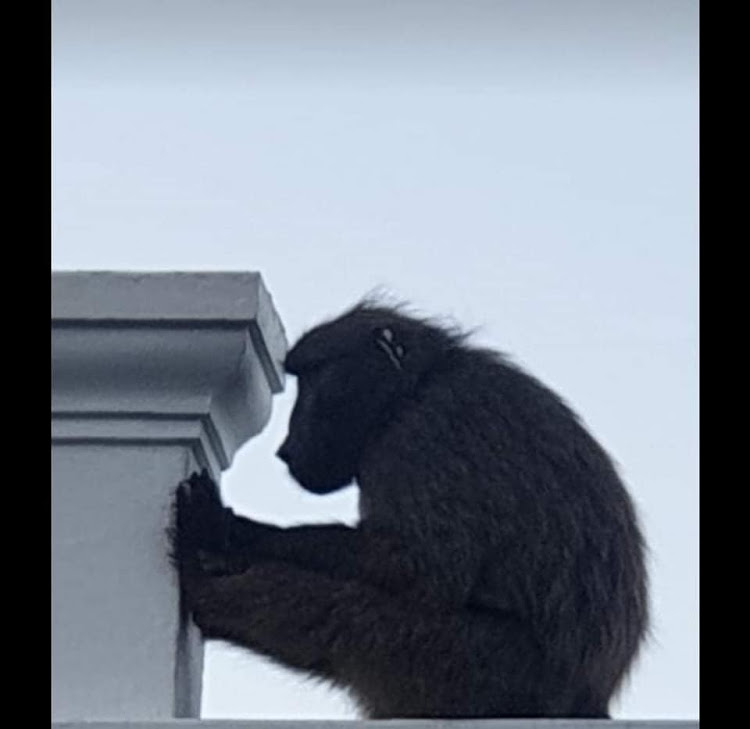 Kataza has slept in various places since his relocation from Kommetjie to Tokai, including Pollsmoor Prison.
Image: Supplied

A row over a Cape Town baboon has escalated into a criminal case after a city official was threatened and his property vandalised in a retaliatory attack.

The city said on Friday this was not the first time its staff had experienced a backlash against its baboon management policy, and in particular its treatment of a particular baboon known as SK11, or Kataza.

Kataza was first relocated by the city from his home range in Kommetjie due to troop dynamics, and then returned to the area after failing to settle in “exile” in Tokai, where he instead attracted a fan base of sympathetic residents who shared their sightings on social media.

But the city says opposition to their baboon management policy has now reached criminal proportions.

“We have noticed a trend where officials are being targeted and vilified by some of those who disapprove of the city’s urban baboon programme,” said mayoral committee member for spatial planning and environment Marian Nieuwoudt.

“It is very distressing that it has now reached a point where an official is threatened with physical harm shortly after his personal property was vandalised. This is over and above the hate mail, abusive messages, and insults aimed at staff who are, as part of their duties, involved in managing this programme.

The baboon population of the Cape peninsula has grown by 80% since reaching its nadir 14 years ago, the City of Cape Town said on Wednesday.
News
1 year ago

Mpumalanga MEC for community safety, security & liaison Gabisile Shabalala has called for the people of Jeppes Reef near the Matsamo border with ...
News
2 years ago

These intimidation and bullying tactics are absolutely shocking and unacceptable.”

Rangers employed to keep baboons out of urban areas to prevent raiding had also been targeted. “I’m very concerned as this interference will give way to an increase in baboon raiding in the area and damage to private property,” said Nieuwoudt.

“Some residents have already contacted the city with complaints about the impact this is having on their quality of life as they have to stay indoors and lock all windows and doors while the baboon troop is moving through town.

“Adding to this challenge is that the residents who actually support the programme are reluctant to do so in public out of fear of being targeted and vilified by those who are opposing efforts to keep the baboons out of town.”

Last week the city confirmed Kataza was seen interacting with his natal troop near Kommetjie. He was removed from the area earlier this year after reportedly creating a splinter group that raided homes in the area. It remains to be seen whether he will reintegrate into his troop.

“His behaviour will be monitored and assessed again according to the guidelines,” the city said in a statement on Friday.

“We kindly request the local community of Kommetjie and surrounds to please allow SK11 (Kataza) to adapt to his surroundings and to not follow or feed him. This is pivotal, as interference may have an impact on his movements.”

Residents warned after a baboon is spotted running around in Gauteng

Johannesburg residents have been urged to exercise extra caution after a baboon was spotted in NorthCliff, Johannesburg, on Wednesday.
News
2 years ago

A case "of vile cruelty" has been withdrawn by the state, says a disappointed National Council of SPCAs.
News
3 years ago
Next Article