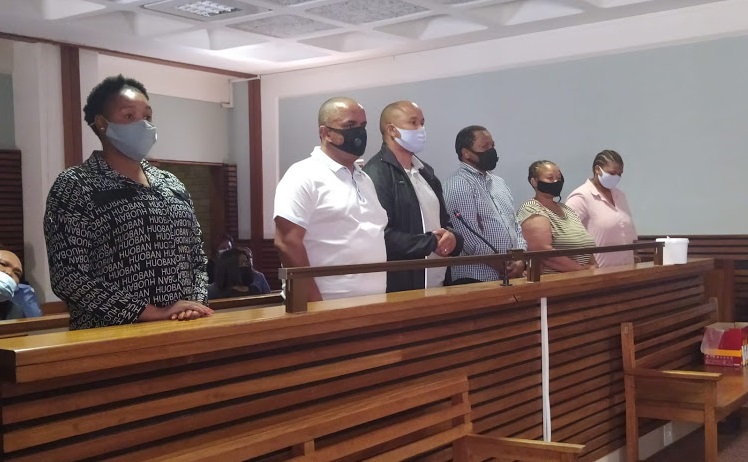 A former senior official from the Northern Cape health department appeared alongside his relatives at the Kimberley magistrate's court on charges of tender fraud.
Image: Supplied

A former senior official at the department of health and five relatives implicated in tender fraud related to the renovation of public hospitals in the Northern Cape were released on bail after appearing in court on Tuesday.

The six were arrested by the Hawks earlier in the day.

Godfrey Moncho was the deputy director of plant engineering and also a projects manager in the infrastructure department. He appeared in court with Valentia Motlhanke, Maclean Motlhanke, Tshepo Timothy Motlhanke, Millicent Motlhanke and Nthabiseng Sekute.

The accused, and companies connected to them, were charged with 22 counts of fraud related to renovations at three public hospitals, said National Prosecuting Authority (NPA) spokesperson Sipho Ngwema. The matter is related to contracts amounting to R10m which were issued for the renovations between July 2014 and June 2015 at West End Specialised Hospital, and Kuruman and Kimberley hospitals.

The contract amounts were all under R500,000 and as a result, the provincial health department did not go on open tender but service providers were invited to submit written quotations. However, supply chain processes were undermined in the selection process, said Ngwema.

Moncho was not in the supply chain management unit of the health department but during instances relevant to the case, allegedly sourced quotations from service providers.

The service providers allegedly quoted to exclude competition and the directors did not declare they were family members or how they were related to Moncho. In some of the hospitals, they allegedly did not render all the services yet claimed and were paid the full amounts of the contract.

In one case, a company claimed to have installed vinyl sheeting at Kuruman Hospital and an investigation revealed that did not happen.

The accused were granted R10,000 bail and the matter was postponed to February 2021.

Motsoaledi must account for how the Bushiris managed to flee SA, DA says

Home affairs minister Dr Aaron Motsoaledi should account for his department’s failure to effectively manage SA’s ports of entry and departure, ...
News
5 months ago
Next Article