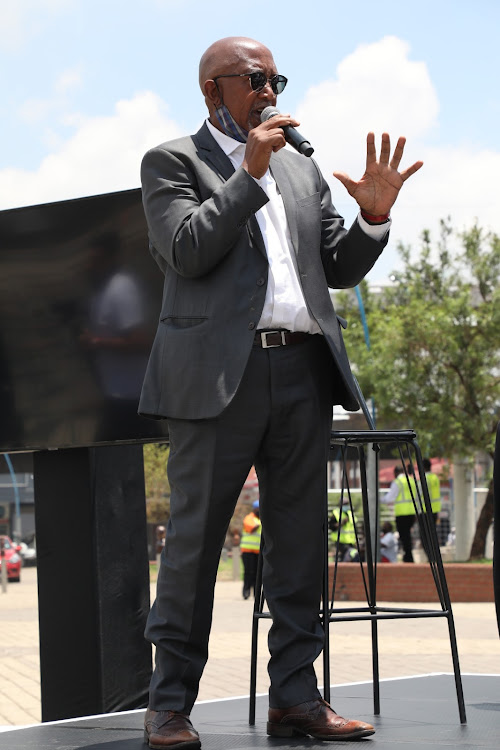 Former Kaizer Chiefs and Orlando pirates soccer personalities, as well as renowned saxophonist Sipho “Hotstix” Mabuse, have highlighted the importance of investing in education in the midst of fame.

The three spoke at an event held at Mary Fitzgerald Square in Johannesburg last week where 948 desks were placed in a room, each one representing 10,000 men without matric in the country.

Former soccer players Siboniso Gaxa, Phumudzo Manenzhe, Dikgang Mabalane and Katlego Mashego expressed how difficult it was to chase education and be on the field at the same time.

Former Orlando Pirates striker Manenzhe recalled how excited he was when he received the news that he would be signed but his father insisted he continue with school.

“When they realised that I was minor and could not sign the deal, they took me to my parents with a briefcase full of money and my father said I am not leaving the house without going to school,” said Manenzhe.

He said it was his grandmother’s words that encouraged him. She told him that it was about what you do when no-one is looking that counts.

Manenzhe said a lot of people were surprised when he finished his studies because he had never shared it.

“I only had practice once a day because of school and others would practice twice,” he said.

Burnout classic hitmaker Mabuse said that he was inspired by his children to pursue a matric certificate at the age of 60.

“I went to school with children young enough to be my grandchildren and I volunteered to be a prefect, and I would always discipline them to not use phones in class,” said Mabuse.

Former Moroka Swallows winger Mabalane said with his strict background, he knew that not studying further was not an option and that became a norm for him throughout his life.

“I was scared of my parents and understood that the retirement age in a football career is 30 while a Standard Bank CEO can retire at 50 and beyond.”

Mabalane said that soccer players make money for a maximum of seven years and more, if they are lucky, and that’s what pushed him, though making time for his studies was challenging.

He said financial education is also important for soccer players because they receive large sums of money.

It is with these stories that Black Label announced its partnership with College SA to provide 32 adult men an opportunity to complete their matric certificates through distance learning.

“At Carling Black Label we exist to reward and recognise the champion within. We believe that South Africans have gold inside, gold that needs to be refined through hard work and perseverance,” said Black Label brand director Arne Rust.

Rust said this initiative is a new way to empower and support champion men in achieving their dreams.

Music legend Sipho 'Hotstix' Mabuse to go back to school

Inspirational jazz musician Sipho "Hotstix" Mabuse says he will enroll for full-time studies at the University of Johannesburg next year.
Entertainment
2 years ago

Legendary singer Sipho "Hotstix" Mabuse has decided to put a coronavirus twist on his most famous hit song Burn Out to encourage the public to take ...
Entertainment
2 years ago
Next Article