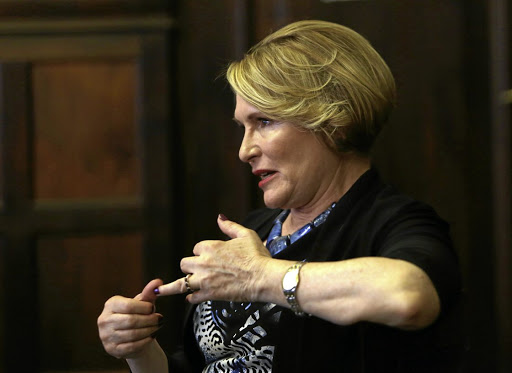 DA federal council chair Helen Zille has reacted to claims that the DA was out of line when comparing protesting EFF members at Brackenfell High School to Nazis.

The DA came under fire last week after it issued a statement in response to a violent confrontation between community members and EFF protesters at the school in Cape Town, by comparing the red berets to “the Nazis”.

“If we are to prevent people from taking the law into their own hands, the police must do their job properly. It was the job of the police to prevent and disperse the EFF [which was] unlawfully gathering outside a school and seeking to infringe on the rights of private citizens,” the statement read.

“The Nazis had the brown shirts that went around terrorising minorities. SA has the red shirts.”

The EFF slammed the comparisons, but speaking on a new podcast series by former Financial Mail editor Peter Bruce, Podcasts from the Edge, Zille said they were accurate and profound.

“What the red shirts in SA are doing is precisely what the brown shirts did in the Weimar Republic. It is no stretch at all. That is how Hitler built his support and this is how Julius Malema is building his support. As Churchill said, people who will not learn from history are bound to repeat it.”

She also touched on Mbali Ntuli's future in the party after losing her party leadership battle to John Steenhuisen, and the Covid-19 pandemic.