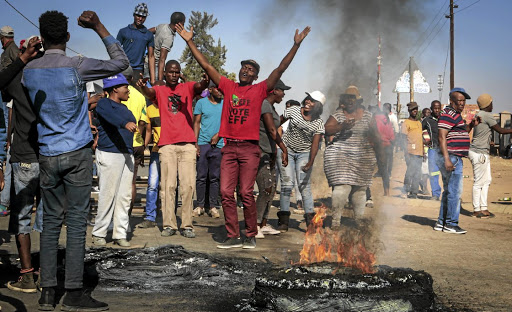 Local schools and the offices of the Dr James Moroka local municipality have been closed in Siyabuswa, Mpumalanga, after residents embarked on a protest against the suspension of municipal manager Thami Kubheka.
Image: Sebabatso Mosamo

The SA Human Rights Commission (SAHRC) is to pursue criminal charges against the administrator of Dr JS Moroka local municipality who allegedly failed to appear before the commission on Wednesday.

The SAHRC convened a subpoena hearing this week due to the failure of the administrator, named by the commission as BM Mhlanga, to respond to allegations levelled against the Mpumalanga municipality relating to water shortages.

SAHRC provincial manager Eric Mokonyama said the subpoena proceedings came on the back of failed attempts to secure a response to the allegations.

He said in addition to the written communication to the municipality, and Mhlanga in particular, Mhlanga was contacted telephonically by the commission five times.

He said a day before the scheduled hearing, the municipality made a written request for a rescheduling of the date. “The reason given for the request was that the municipality is still preparing a response regarding the matter. There was no explanation given as to why the response was still not ready when the matter was brought to the attention of the municipality in March and the subpoena notice was served on the municipality on September 28,” he explained.

The SAHRC Act states that any person who, without just cause, refuses or fails to comply with a notice or fails to afford the commission the necessary assistance, shall be guilty of an offence and liable on conviction to a fine or imprisonment for a period not exceeding six months.

"On learners aggrieved by exclusion from a private party, there's a time for everything. It's exam time now. Let children write without the stress of ...
News
10 months ago

The SAHRC has condemned the violence that erupted outside Brackenfell High School on Monday.
News
10 months ago

Mokonyama said the chairperson of the commission further directed that criminal proceedings be instituted against Mhlanga and that the department of co-operative governance & traditional affairs (Cogta) consider reprimanding Mhlanga for his unbecoming conduct.

The commission also directed Mhlanga to appear before it on January 22 2021.

“The commission is deeply concerned with how the municipality and Mhlanga in particular conducted himself in this matter.”

Parliament's Cogta portfolio committee expressed concern in September at the state of affairs in the Dr JS Moroka local municipality.

The committee heard from the office of the auditor-general that audit outcomes there continued to regress.

In the 2016/17 financial year, the municipality received a qualified report with findings. In 2017/18 the report was adverse with findings, and the report for 2018/19 had not been finalised as the audit was paused in October 2019 due to threats of violence directed at the auditors.

Dr JS Moroka municipality in the 2018/19 financial year was responsible for R1.3bn in unauthorised, irregular, and fruitless expenditure. The municipality’s CFO had been on suspension since 2018 and investigations into alleged corruption were at an advanced stage.

Two weeks ago the oversight committee of the National Council of Provinces (NCOP) visited Dr JS Moroka municipality and brought to light its dire financial position and safety concerns that resulted in the auditor-general not performing audit duties.

“This municipality will totally collapse if no urgent action is taken to support it. Whoever owes Dr JS Moroka must pay,” the committee said in a statement.

The South African Human Rights Commission (SAHRC) on Tuesday condemned what it described as the "cold-blooded murder" of environmental activist ...
News
10 months ago

SAHRC confirms probe into 'coloured' teacher who self-identified as 'African'

Is the official use of apartheid-era racial categories a human rights violation?
News
11 months ago
Next Article