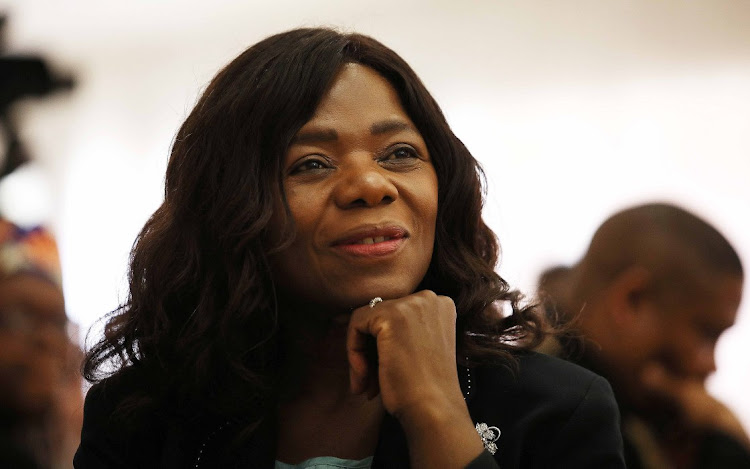 Former public protector Thuli Madonsela says South Africans need to empower the country's poor in a manner that will allow them to stand on their own and be lifted out of poverty.
Image: ESA ALEXANDER

If SA wants to plug the huge gaps in social inequality, the poor need to be empowered and not treated like charity cases.

This is according to former public protector and law professor Thuli Madonsela, who said that all South Africans, including in government, should ensure that the less privileged are empowered to stand on their own and be lifted out of poverty.

Madonsela, who is the Law Trust Chair in social justice at the University of Stellenbosch, has also labelled the special Covid-19 social relief of distress grant of R350 per month as “palliative care” as it doesn’t address the root cause of inequality.

President Cyril Ramaphosa introduced the grant, which will remain in place until the end of January, during SA's coronavirus lockdown. It is open to anyone who is not a beneficiary of any other form of social security grant or UIF payment, and who is unemployed.

While her department was one of the groups that supported the extension of the government grant, she said: “We know that that's palliative care.”

Madonsela added: “That's really just giving people Panado. A sustainable development is about making sure we find out why people are poor and how do we help them to be lifted out of poverty, not just to be out of poverty.”

Madonsela said that to create a nation where everyone prospered, programmes needed to be created to address pertinent questions such as who would benefit from them, and would the programme actually reduce poverty or would it exacerbate disparity.

Addressing the second annual Social Justice Summit that she hosted on Wednesday, Madonsela — who also launched a crowdfunding initiative aimed at advancing equality and eliminating poverty — said many South Africans were already doing something to end poverty and inequality, such as helping relatives with food, transport and medical services.

She said that, too often, this has been a “just us approach”, when people were only concerned about themselves and those who were like them. She said this approach not only resulted in injustice, but also in huge inequalities, as seen with the apartheid system that didn’t bring any sustainable peace and development because of the exclusion of the majority of South Africans.

Speaking of the crowdfunding initiative — named the Musa Plan for Social Justice (M-Plan) and based on the Marshall Plan that helped rebuild Europe after the Second World War — Madonsela said the idea was not to give charity — “but we hold her hand and we're with you to lift yourself up so you can stand on your own”.

“Why are we doing that? We're doing it because the African notion of coexistence has always been about ‘stronger together’. It's more like elephants ... Elephants will help an elephant that is in trouble, will cry when an elephant is in distress, even if it's not from their tribe. Because they know that when they work together they can get so much more, against everything else,” she said.

Madonsela added: “But the other important thing about this social justice M-plan is it's not about us altruistically helping people ... It is about us helping people recognise that they have the capability. It's a ground-up approach. We use the science that we have to help communities understand the sustainable development goals to lift themselves and then connect them to resources and government, to resources and business, but also the Social Justice Fund.”

Madonsela said the new M-fund, where every South African can donate as little as R5 will be an impact investment fund “where we don't invest randomly, but we invest in a dream”.

SA should secure better health, security of its citizens by fixing inequalities in sanitation

Water, as a precious resource, is often taken for granted, however, when natural disasters or pandemics strike, access to clean water can be the ...
Opinion
8 months ago

Addressing the summit, Archbishop of Cape Town Thabo Makgoba said while the interfaith community wielded greater power in shaping communities, it did not fully appreciate this power in achieving social cohesion.

“Being at the forefront of where people from different cultures and faiths meet and co-operate, the faith community has the capacity to harness resources towards remedying inequality and poverty and to diffuse conflict in society. Unity among religions is of paramount importance to live in harmony among different religions and to promote peace and tolerance to humankind. All faiths have common stances of upholding unity, love, compassion peace and co-operation,” he said.

Justice minister Ronald Lamola acknowledged that while SA celebrates about 25 years of democracy, many South Africans are yet to enjoy social justice.

“We must be honest; obtaining social justice is still elusive in various communities and spheres of society in general. Politically, equality is afloat but social justice requires a substantial amount of work.”

He said that many South Africans were trapped in poverty was determined mostly by gender, race and location. He admitted that corruption has been a hindrance in achieving social justice.

“One thing is clearer, in the past couple of years in particular, our quest as a nation for social justice has been suffocated by corruption. If we accept that social justice is described 'as the fair and compassionate distribution of the fruits of economic growth', then we must agree that corruption indeed derailed us,” said Lamola.

It's better late than never to formalise township economy

Last week, after years of promising action, the Gauteng government – through its economic development department – published a bill to drive the ...
Opinion
7 months ago

Transformation for transformation’s sake does not serve us as black people. Instead it gives more ammunition to the naysayers.
Opinion
7 months ago
Next Article