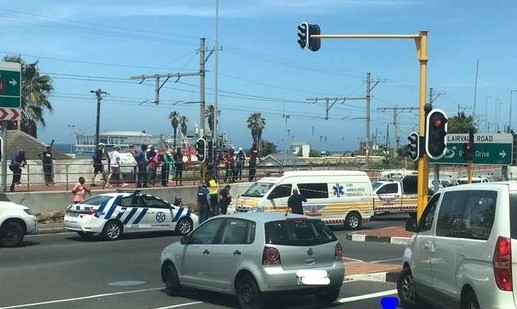 The scene in Kalk Bay on November 3 2020 when a 14-year-old cyclist was killed after apparently losing control of his BMX.
Image: Facebook/1Second CPT

A 14-year-old boy was killed in a cycling accident on Tuesday at a busy traffic intersection in Cape Town, police confirmed on Wednesday.

The boy, from Lavender Hill, was among a group of youngsters on BMX bikes seen cycling down the steep hill between Boyes Drive and the main road adjoining Kalk Bay harbour.

It appeared he was unable to stop when reaching the main road and collided with a truck. “He was declared dead on the scene,” said police spokesman Andre Traut.

“A culpable homicide docket has been opened and will be investigated by Muizenberg Saps.”

Traffic was held up for hours after the incident to allow officials to examine the scene.

Residents gathered nearby, some of them visibly distraught, and a witness to the accident, who posted on Facebook, said: “They came racing down Boyes Drive and he didn't have brakes on his bike.

“He tried turning towards Fish Hoek way but the bike slid out under him and under the truck.”

A post in response said: “Condolences to the family of the child and also strength to the poor truck driver who must be shattered, as from what I understand the boy lost control coming down Boyes Drive and couldn’t stop.”

A social worker linked to the local ratepayers' body was deployed to liaise with the family and police officers.

Five people were killed and several others injured in separate collisions in Johannesburg at the weekend.
News
11 months ago
Next Article