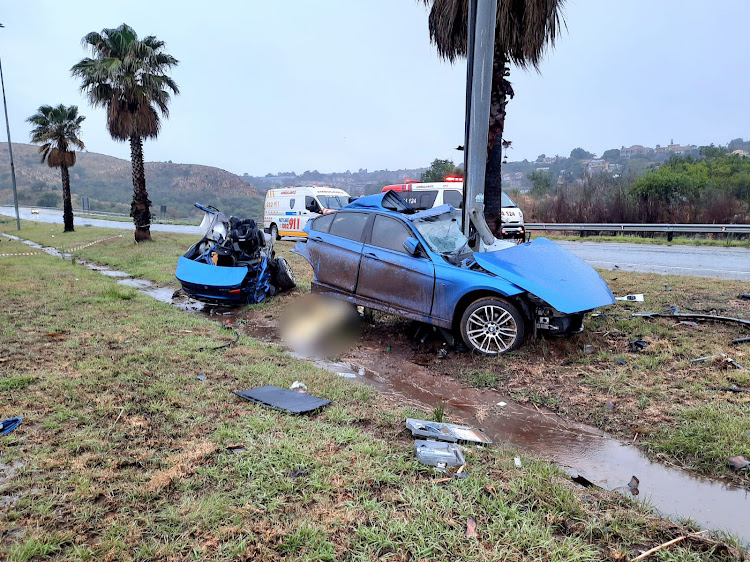 A BMW was ripped into pieces in a collision that led to three men dead in Johannesburg.
Image: ER24

Five people were killed and several others injured in separate collisions in Johannesburg at the weekend.

In one incident, three men died in a collision along Hendrik Potgieter near 14th Avenue, west of Johannesburg.

"Paramedics from ER24 that arrived on the scene found a BMW ripped into several pieces. Upon assessment, they found that three men succumbed to their injuries on the scene," ER24 spokesperson Werner Vermaak.

The men were declared dead at the scene.

ER24 also attended to other collisions which claimed the lives of two people.

Wails of anguish echoed through a large open tent on a sports ground at Zidweni in the KwaZulu-Natal Midlands as 13 coffins lay before hundreds of ...
News
1 year ago

"During the early hours on Sunday morning, one person was killed and five others were injured in a vehicle rollover along the N14 in Brandvlei.

"A pedestrian was killed in a hit-and-run in Krugersdorp while another pedestrian sustained serious injuries in a collision in Vereeniging," Vermaak said.

"Three people were injured when a vehicle crashed into the back of a truck along the N1 north at the Soweto highway.

"The exact circumstances surrounding these collisions are not yet known. Local authorities attended the scene and will conduct an investigation," said Vermaak.