Bushiri had diplomatic passport but not diplomatic status, court hears 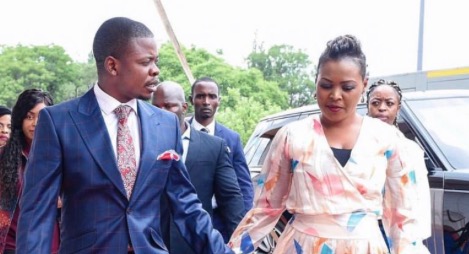 Self-proclaimed prophet Shepherd Bushiri's lawyer on Friday handed in papers to the court, purportedly from the Malawian government, stating that Bushiri and his wife were given Malawian diplomatic passports but not diplomatic status.

Advocate Annalie Van den Heever maintained her clients were not a flight risk, and were prepared to pay a bail amount of R200,000.

She said Bushiri and his wife Mary were prepared to abide by the bail conditions set in 2019, which included that they stay in Gauteng and could only travel to the North West to attend to their Sparkling Waters Hotel.

The couple and co-accused Landiwe Ntlokwana continued with their bail application at the Pretoria magistrate's court on Friday, but remain in custody as their application was not concluded.

The matter has been rolled over to Monday for both parties to continue with their  arguments for the formal bail application.

They are charged with fraud and money laundering related to an investment scheme valued at R102m.

Magistrate Thandi Thelede said both the defence and state must prepare heads of arguments over the weekend.

She said with the amount of exhibits presented, she would reserve judgment as she needed time to go over the documents of both parties.

Prophets and politicians are not a law unto themselves

When it comes to questions of criminal conduct, all of society is subject to the same penal code
Opinion
1 year ago

The state has argued that there is a high probability that if the accused are released on bail, they will try to evade trial.

However, Bushiri denied that he and his wife are a flight risk as all passports in their names have been handed over to the investigating officer. He has also denied that his property is up for sale.

Van den Heever argued that Bushiri and wife had complied with their bail conditions when released on bail before.

It was also heard earlier during the bail application that Bushiri doesn’t have any vehicles under his name and that his luxury vehicles are under the name of the “prophetic channel”.

The state said there was evidence that the channel cannot afford these vehicles.

The state submitted that the two vehicles, a Bentley and a Maserati bought for his daughter and others, were allegedly taken illegally to Malawi.

In his affidavit for his bail application, Bushiri said he intended to plead not guilty.

The state also argued that the Bushiris use their various personal and business bank accounts to fund each other so that they seem like they are running a legitimate business whereas there is evidence of money laundering.

It was heard in another affidavit read by the state, which was submitted by the SAPS official in one of the investigations of the victims of investment schemes, that Bushiri's legal representatives have intimidated state witnesses.

But Bushiri denied interfering with any witnesses or sending his lawyer to do so. The state alleged that Bushiri's legal representatives have intimidated state witnesses and paid some of the state witnesses up to R500k from his bank account.

Mary Bushiri was arrested by the Hawks on Tuesday, October 20, at her home while Bushiri handed himself over to the authorities later that day.

Hundreds of pastor Shepherd Bushiri supporters turned up at the Pretoria magistrate's court to support their leader. Bushiri and his wife, Mary Bushiri have been charged with fraud, theft and money laundering.

Citizens must realise ANC only cares about its own 'better life'

People's vote is their power and responsibility
Opinion
1 year ago

Self-proclaimed prophet Shepherd Bushiri‚ his wife Mary and their co-accused‚ Landiwe Ntlokwana‚ will be waiting with bated breath to find out if ...
News
1 year ago

See conmen at pulpits for what they really are

A family I know recently moved into a new house. According to the Christian faith, entry into a new house ought to be preceded by a serious prayer ...
Opinion
1 year ago

Drama unfolded outside court on Friday as supporters of self-proclaimed prophet Shepherd Bushiri and wife Mary circulated photos of the presiding ...
News
1 year ago
Next Article