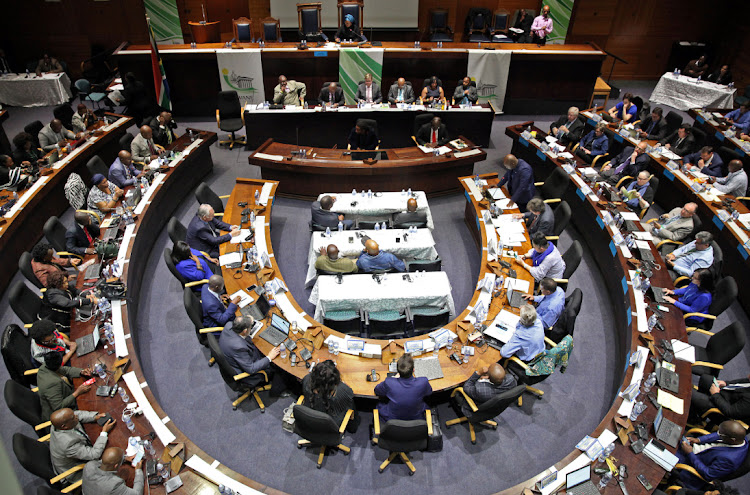 Inside the Tshwane metro city council. The scales are tilted in favour of the DA as the City of Tshwane elects a new mayor. File image.
Image: THAPELO MOREBUDI

The contest for the mayoral chain in the City of Tshwane has just become a two-horse race after only the DA and EFF fielded candidates.

The scales are firmly tilted in the favour of the DA, which is the majority party in council after the ANC decided not to field a candidate.

The city is holding its long-awaited mayoral election after a tit-for-tat between the ruling DA and the EFF, together with the ANC, which had ganged up to topple the coalition government since late last year.

Friday's developments may signal an end to the ANC-EFF partnership in council as ANC leader Kgosi Maepa, after a long delay when he was recognised to make a nomination, declined to do so.

The ANC and EFF have been courting each other over coalition governments in Gauteng since late last year when the DA was toppled in the City of Johannesburg.

Their relationship went sour when the ANC insisted on fielding current mayor, Geoff Makhubu, as its mayoral candidate.

Despite this setback, the two parties have had a vibrant working relationship in Tshwane since the EFF broke ties with the DA over its internal struggles.

The meeting, which is held in a hybrid format, with councillors sitting in different venues and using virtual platforms, was adjourned for more than an hour to allow for the Electoral Commission of SA to print ballot papers which will bear Williams' and Mabogwane's names.

The Gauteng provincial executive is set to meet today to discuss the crisis faced by the City of Tshwane after the Supreme Court of Appeal (SCA) ...
News
1 year ago

If there is one thing South Africans have learnt in the past four years it is that coalition governments do not work, at least not with the current ...
Opinion
1 year ago
Next Article