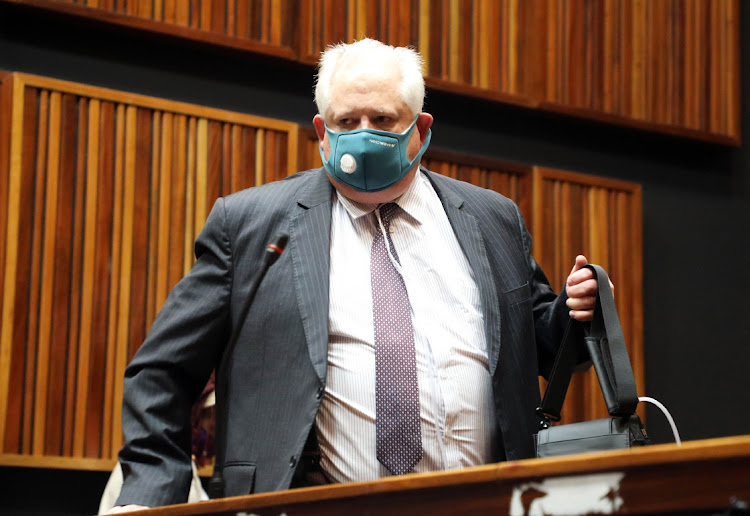 Former Bosasa COO Angelo Agrizzi remains under guard in an ICU ward in a private hospital. A decision on whether he should be released on bail will be made on Friday.
Image: ANTONIO MUCHAVE

The high court in Johannesburg is on Friday expected to pass judgment in an appeal by former Bosasa CFO Angelo Agrizzi to be released on bail.

Sixteen days ago, the Johannesburg specialised commercial crimes court, sitting in Palm Ridge, denied Agrizzi bail after his first appearance on a charge of corruption.

The court reasoned that he was a flight risk as he did not declare all his overseas assets when he applied for bail.

Agrizzi took ill a day after being denied bail and has been in hospital ever since. He was transferred to a private clinic when his condition worsened. His life partner, Debbie Agrizzi, said last week he was in a critical condition after suffering a heart attack last Wednesday.

During his bail appeal before the high court in Johannesburg on Monday, Agrizzi's advocate Mannie Witz presented a report from a specialist at the private hospital stating that Agrizzi was gravely ill in the hospital's ICU, where he remained ventilated and on dialysis.

Witz said Agrizzi was tied to the bed by his leg, and three armed warders were standing guard inside the ICU ward, making it difficult for doctors to attend to him.

The former Bosasa executive is being stabilised in high care, his lawyer says.
News
1 year ago

Witz said the magistrate had erred by not giving more weight to Agrizzi's medical condition when denying him bail. Witz further added that another reason Agrizzi should be released on bail was because of the weakness of the state's corruption case against him.

Witz said facts showed the two payments that were made to Agrizzi's co-accused, former ANC MP Vincent Smith, came from Bosasa and not from Agrizzi.

The state opposed Agrizzi's bid to be released on bail.

Prosecutor Arno Rossouw said the specialised commercial crimes court did indeed take the health, age and comorbidities of Agrizzi into account when denying him bail. Rossouw said Agrizzi chose to mislead the court regarding his assets and where they were held.

He said Agrizzi was presented with an affidavit filed by an investigating officer on the day of his bail application which showed that Agrizzi failed to disclose that he and his common law wife transferred about R24m to offshore accounts between December 11 2018 and January 19 2019. Rossouw said in replying to this allegation, Agrizzi still refused to acknowledge the extent of the funds he and Debbie Agrizzi transferred to offshore accounts.

“It is accordingly respectfully submitted that the reluctance of the appellant to take the court into his confidence in respect of his foreign assets is indicative of his intention to abscond whenever the opportunity next presents itself,” Rossouw said in the heads of argument where the state is opposing bail.