Bushiris back in court as their bail bid continues 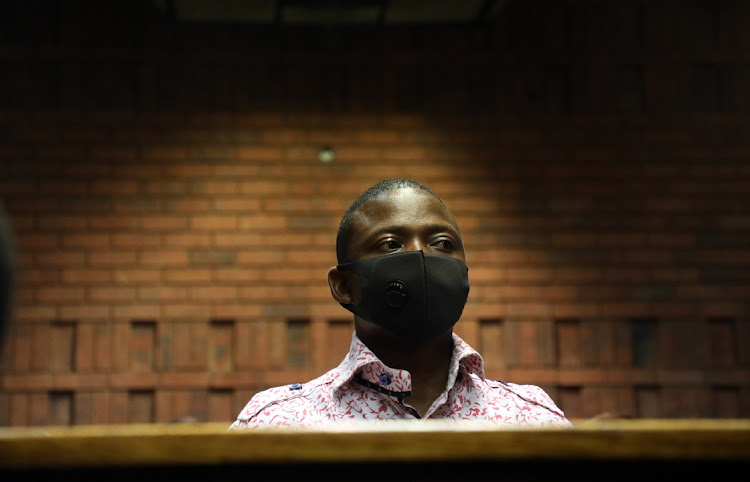 While it has emerged that Shepherd Bushiri and his wife are in SA illegally, their bail application is set to resume at the Pretoria magistrate's court on Friday.
Image: THULANI MBELE

Self-proclaimed prophet Shepherd Bushiri's bail application will continue on Friday after it was postponed on Monday when the court ran out of time.

Bushiri, his wife Mary and three co-accused, including Landiwe Ntlokwana, appeared in the Pretoria magistrate's court on Monday for a formal bail application. But the court ran out of time and magistrate Thandi Thelede ruled that the application would continue on Friday October 30, as she had other matters to attend to.

They are charged with fraud and money laundering related to an investment scheme valued at R102m. Mary was arrested by the Hawks on Tuesday October 20 at her home, while Bushiri handed himself over to the authorities later that day.

From day one of the couple's appearance, supporters and members of the Enlightened Christian Gathering (ECG) church braved the scorching sun outside the court to stand in support and demand their release. The supporters on Monday closed off Francis Baard Street in Pretoria as they supported their “Papa”. The crowd sang and prayed on the street, and held placards bearing the Bushiris faces.

In making the postponement, the magistrate said she was concerned about a possible Covid-19 outbreak that might result from the crowd gathering outside without social distancing.

“Most of those people are not social distancing and we are in the CBD and there is a very strong possibility that the outbreak might arise,” she said.

Bushiri, his wife and Ntlokwana made formal bail applications in the form of affidavits.

In his affidavit, Bushiri said he intended to plead not guilty. He said his passports had been handed over to the investigating officer and that he had no previous convictions nor any intention of evading trial or fleeing the country.

The state's case against Shepherd Bushiri, his wife Mary and their co-accused Landiwe Ntlokwana descended into a farce yesterday.
News
1 year ago

Bushiri said he earns about R566,000 a month, while his wife revealed that she earned R221,000 a month from “entities”. Bushiri questioned the charges against him, saying his involvement in the case was unclear.

Meanwhile, in an interview on SAfm, home affairs minister Dr Aaron Motsoaledi said Bushiri and his wife are in SA illegally. Mostoaledi said the Bushiris entered SA through the Beitbridge border post on September 6 2009 and were issued visitors' visas.

“Visitors' visas have a time frame. While on this visa Bushiri started to register certain businesses. In 2014, 2015 and 2016 he registered companies with the CIPC and started conducting businesses, which is not allowed in terms of visitors' visas.

“We wanted to withdraw this permanent residence because it is fraudulent. Two notices were issued to court and two of them were mysteriously withdrawn by our own officials in home affairs. The third one, dated August 2020, was issued and Bushiri rushed to court to say 'home affairs want me to explain certain things about my residence'. The ruling by the judge was that we have to wait until May next year. We don’t agree with that, we have lodged an appeal to the court,” he said.

Hundreds of pastor Shepherd Bushiri supporters turned up at the Pretoria magistrate's court to support their leader. Bushiri and his wife, Mary Bushiri have been charged with fraud, theft and money laundering.

The media has been barred from taking pictures and recording the proceedings in the Pretoria Magistrate’s Court where prophet Shepherd Bushiri and ...
News
1 year ago
Next Article