'I did nothing wrong': Bongani Bongo maintains his innocence 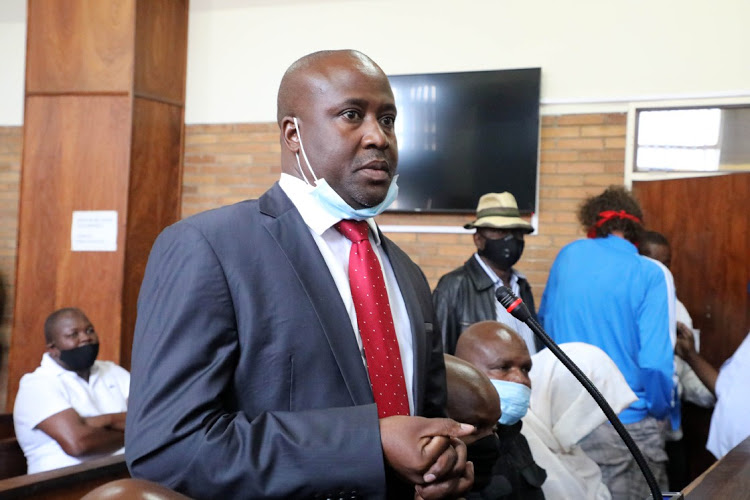 Bongani Bongo said charges against him were baseless and aimed at tarnishing his name after appearing at the Nelspruit Magistrate's Court with other 11 accused on Wednesday.
Image: ANTONIO MMUCHAVE

Former state security minister and current home affairs portfolio committee chairperson, Bongani Bongo says the corruption and money laundering charges against him are baseless and aimed at tarnishing his name.

Bongo was speaking to the media after he and his brother Sipho were granted bail of R10,000 at the Nelspruit magistrate's court yesterday.

Bongo and 10 other co-accused handed themselves over to the Nelspruit police station yesterday morning before their appearance in court after warrants for their arrests were issued.

They are accused of colluding to defraud the Mpumalanga department of human settlements of about R124m.

Bongo was the department's head of legal services at the time of the alleged crime and was allegedly involved in the deals that resulted in the government overspending by R54m when purchasing three farms for township development.

The former minister said he did nothing untoward when he was working in the Mpumalanga government.

Bongo, his brother granted bail of R10,000 each

Former state security minister and current chairperson of the portfolio committee on home affairs, Bongani Bongo, and his brother Sipho have been ...
News
1 year ago

“As we were busy in court I recollected on what this is all about because I was in the employ of the department as a legal  advisor, there’s no wrong doing that was done by the department. I think [former] HOD David Dube, acted above board. I drafted the contracts and I think as a legal advisor nothing happened to the things that they are talking about here," Bongo maintained.

"They are saying my brother benefited or worked with some of the subcontractors who were doing the work... I find these charges to be very disturbing, they are meant to discredit me. There are people who want to tarnish my name. What I said in Cape Town about these sequence of arrests and abuse of state resources, I think it’s continuing.”

However, didn’t want to name the people he claimed are using state resources to “discredit” him.

Among those appearing along with Bongo were former head of the department of human settlements Dube, Patrick Chirwa and Harriston Dlamini.

The court heard that Bongo and his brother are facing a schedule one offence. The charges are three counts of corruption and money laundering.

State prosecutor adv Henry Nxumalo told the court that the Bongo brothers received three payments which were paid to a car dealership on their behalf.

“The accused allegedly indirectly benefited from three transactions which were made by Nsingwane Attoneys to a car dealership. They are facing charges of money laundering and the state might add more charges to the accused,” said Nxumalo.

Nxumalo told the court that the modus operandi in the crimes relating to the land deals was that companies would buy the farms at a lower price and sell them to the provincial government at a higher price.

Nxumalo said in one instance in Ermelo, a company got a farm free of charge and sold it through misrepresentation to the government.

He said the other accused, who are facing schedule five offences, have to convince the court that hey must be given bail.

Magistrate Suzan Monaledi gave Bongo and his brother R10,000 bail each. Their case was postponed to March 4 2021 to allow for further police investigation.

We hope more looters are nabbed

The popular saying that “you cannot escape the long arm of the law” rings true for the SA elite who enriched themselves by looting public funds, as ...
Opinion
1 year ago

ANC MP Bongani Bongo was back in parliament on Tuesday, chairing the home affairs portfolio committee and saying his party was still processing ...
News
1 year ago
Next Article