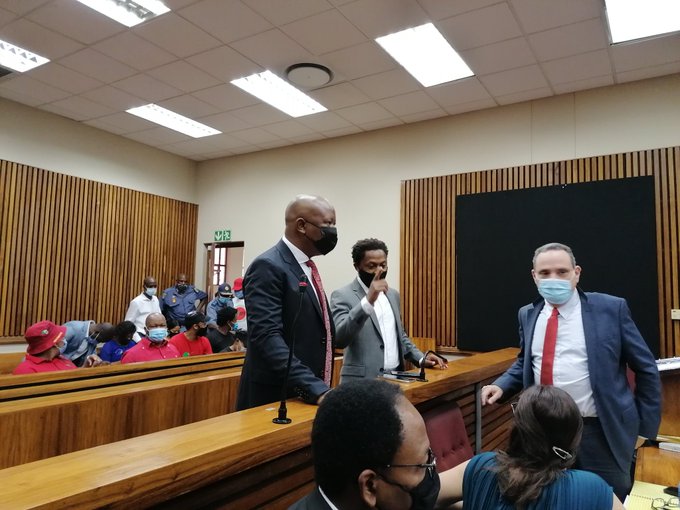 EFF leader Julius Malema and MP Mbuyiseni Ndlozi at the Randburg magistrate's court on the second day of evidence being led in their trial on a charge of assault.
Image: Nomahlubi Jordaan/TimesLIVE

Defence lawyer Laurence Hodes has told the complainant in EFF leader Julius Malema and MP Mbuyiseni Ndlozi's assault case that he would prove that he is lying to the court.

Malema and Ndlozi are standing trial at the Randburg magistrate's court.

They are accused of assaulting Lt-Col Johannes Jacobus Venter in 2018 at the funeral of struggle stalwart Winnie Madikizela-Mandela in Fourways.

Malema and Ndlozi have pleaded not guilty.

JUST IN [WATCH]: During the break, there was a heated altercation as EFF leader, Julius #Malema and MP Mbuyiseni #Ndlozi shouted at and intimidated a man named Wiko from AfriForum, who was sitting near the accused's dock. @etvNewsSA pic.twitter.com/q1pLZR4xTP

Venter on Wednesday told the court that he had stopped Malema's vehicle when they entered the cemetery because it did not have a permit.

During cross-examination on Thursday, Hodes asked Venter if he had asked Malema whether they had accreditation to enter the cemetery.

Venter said he did not ask them. He concluded that the vehicle had no accreditation because it was not visible to him. According to Venter, a permit is normally placed on the left front side of the vehicle at events.

Venter told the court that even if they had a permit, he would still have stopped the vehicle as it was not part of the convoy of cars that were allowed to enter the cemetery.

“You had no right to refuse them entry,” Hodes said.

“The vehicle was not part of the convoy,” Venter replied.

Venter said he was not prepared to change his mind about his decision to stop Malema's vehicle.

“You are lying to this court and I am going to prove it to this court. You said 'I did not see a visible permit'. Why would you look for the permit if you would not have given them permission to enter anyway?” asked Hodes.

“That vehicle was not part of the convoy. That is why it parked at the additional VIP parking,” Venter responded.

“Other vehicles had permits and parked at the designated parking,” he added.

“I'm going to ask the court to draw an adverse inference against you. You are making up your evidence as you go, because your version has changed,” Hodes said.

Hodes asked for permission from the court to play video footage presented as part of the state's case.

Hodes said the gesture the officers were making towards Venter showed that they were holding him back.

Venter denied this, saying the officers were merely supporting him.

Hodes pointed out to Venter that he had pushed back when Ndlozi and Malema pushed him.

“At no stage did I push back,” Venter said.

Hodes also showed Venter what he said was a permit on the dashboard of the vehicle Malema and Ndlozi were travelling in. Venter said he only saw a reflection of something he could not identify, but not a permit.

#EFF Julius Malema leaves the Randburg Magistrate's Court where he is on trial for assault. pic.twitter.com/MD7dreZ7xd

EFF leader Julius Malema has called on businesses to make sure at least 60% of their staff are South Africans.
News
1 year ago

EFF leader Julius Malema and MP Mbuyiseni Ndlozi say the charge of common assault they are facing is part of a political agenda.
News
1 year ago
Next Article