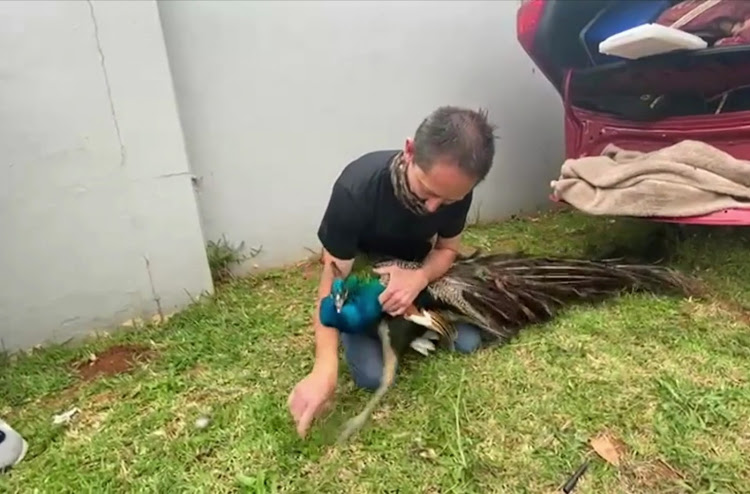 Durban 'snake man' Jason Arnold with the peacock he rescued from the boot of an overturned car on Monday.
Image: Supplied

A kidnapped peacock is set to be reunited with its owner after it was discovered in the boot of an overturned vehicle driven by suspected car thieves in Umhlanga on Monday.

Powell said Marshall Security received a report on Monday morning from the Umdloti Urban Improvement Precinct about the attempted theft of a vehicle.

He said the suspects managed to flee the scene.

The men were spotted by security officers in Umhlanga about 45 minutes later, and a high speed chase ensued.

WATCH: Injured peacock rescued from the boot of a vehicle which capsized after alleged car thieves lost control during a high speed chase in Umlanga yesterday.
Video: Marshall Security@TimesLIVE pic.twitter.com/zLxAQLscuo

"The suspects lost control of their vehicle opposite a petrol station on Umhlanga Rocks Drive and rolled until coming to a stop."

The three suspects attempted to flee on foot but two were caught.

Powell said an inspection of the car they were driving left the security team gobsmacked.

"This one is definitely for the books. Upon further investigation of the suspect's vehicle, our team was surprised to come across a live peacock in the boot.

"The peacock was stolen in the Malvern area."

Local snake catcher Jason Arnold was called to help with the removal of the bird.

"The peacock, which appeared to be slightly injured, was carefully removed from the vehicle and handed to the local non-profit organisation Broken Wings for further care."

It is understood the peacock's owner has made contact with Broken Wings.