The matter has been postponed to December 3 for judgment 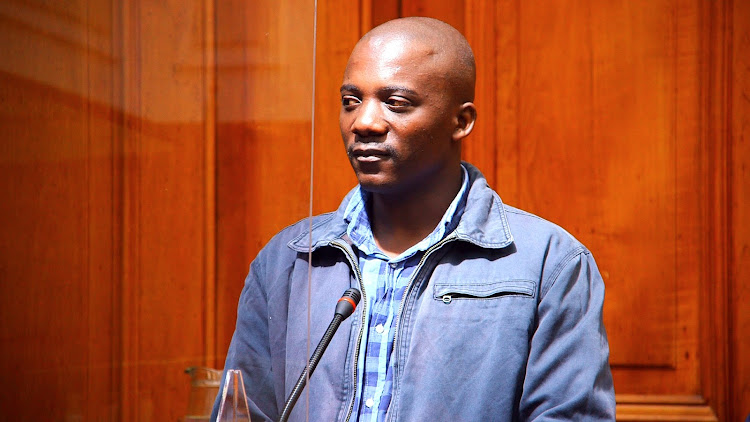 The double-murder case against Zimbabwean Blessing Bveni came to a close on Monday afternoon in the Cape Town high court.

Bveni is accused of murdering pilot Doug Notten and cyclist Ian McPherson — as well as robbing and assaulting multiple others — in the Table Mountain National Park early in 2018.

At the start of Monday's proceedings, Bveni's lawyer, Henk Carstens, proposed a postponement to judge Judith Cloete because of the absence of Bveni's sister, who was hoping to testify on his behalf. She lives in Zimbabwe but could not make it to Cape Town as she is pregnant and does not have a passport.

Cloete denied the postponement, saying it “will be sending out a completely wrong message and may result in the perception of the public that the courts don't take the administration of justice seriously”.

State prosecutor Christopher Burke summarised the 12 counts against Bveni, who was sitting behind him in the dock wearing a white mask over his mouth and nose.

“The accused's defence is that every one of the state's witnesses is lying. This is baseless as the witnesses who testified here were reliable and did not know each other before the incident. It is submitted that not one of the many witnesses came across as evasive. There were almost no contradictions or discrepancies,” said Burke.

He highlighted that Bveni was at some point in possession of items belonging to the victims — a hand patrol radio, a mountain bicycle and a CAT phone. Police also found a blue shirt stained with blood matching one of the murder victims, McPherson.

“As further support for the accused being the person responsible for all these attacks is the extremely violent way the stabbings were done ... Julia Notten [Doug Notten's wife] testified how vicious and repeatedly and angrily the accused stabbed her husband to death,” he said.

“There is more than enough evidence here to prove beyond a reasonable doubt that the accused committed these crimes and taken against his dishonesty and impossible explanation, there is only the state version to rely on and a conviction on all the offences should follow,” said Burke, as he ended his closing argument.

“The shirt which was supposedly found at Bveni's house on March 15 2018 was only booked into forensic evidence on March 20 2018. If this was such important evidence, why did it take five days to be handed in as evidence? The shirt was instead kept in the sergeant's locker for five days. It creates doubt around the evidence,” said Carstens.

The photographic identification parades held by police were also called into question by Carstens.

“Some of the sergeants who were conducting the photo identification with eye witnesses were not independent as they knew details about the case or had some knowledge of the case.

“It is the defence's humble submission that if the court considers all the evidence of the case, the court will find that the accused is not guilty to all the counts as charged,” ended Carstens.

The case was postponed to December 3 2020, when Cloete will hand down judgment.

The case of Blessing Bveni, accused of murdering two people and assaulting and robbing others in the Table Mountain National Park in early 2018, ...
News
1 year ago

WATCH | 'I did not murder them': Alleged Table Mountain killer testifies on the stand

Blessing Bveni has pleaded not guilty to counts of murder, attempted murder, assault, robbery and contravention of the Immigration Act.
News
1 year ago

A man accused of fatally stabbing two people and attacking 10 hikers said on Wednesday that witnesses were lying about his involvement in an alleged ...
News
1 year ago
Next Article