Taxi owners among those arrested for bus driver's murder 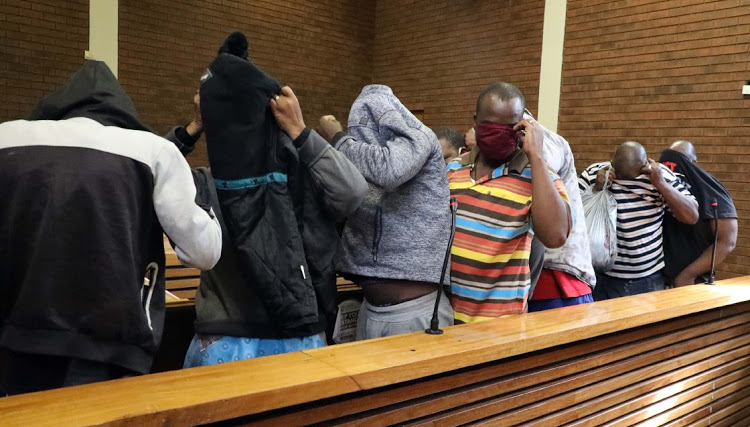 Some of the eight men accused of the murder of a bus driver Neho Motaung in Lawley during their appearance at the Lenasia Magistrate's Court.
Image: ANTONO MUCHAVE/SOWETAN

Three taxi owners are among eight people arrested in connection with the brutal murder of Stabus driver Neho Motaung.

The Lenasia magistrate's court yesterday heard the bail application of six of the eight accused. The six said they intended pleading not guilty to the charges.

Mothebeki has a previous conviction for cable theft for which he paid a R500 fine.

Philemon Likhuru, 38, owns six vehicles making R6,000 a month each. He is married with six children and has no previous convictions. He said he was a breadwinner.

Sipho Dlamini, 51, said he has a taxi that also makes R6,000 a month. He is married with no previous convictions. He said he has a chronic illness, which he did not disclose to the court.

In his affidavit, Jackson Baloyi, 39, told the court that he makes a living transporting children, which brings in about R4,000 a month.

He told the court that he has two previous convictions that were related to selling liquor without a valid permit to do so. “I believe that I am arrested because of being a member of a transport association,” Baloyi said.

Eugene Englishman, 40, said he also transports children and makes R4,000 a month. He has no previous convictions and is married with two children. “I did not intimidate anyone. I intend pleading not guilty to the charges against me,” he said in his affidavit.

Lawrence Ntengemntu, 66, pleaded with the court to give him bail as he is an employed pensioner. Ntengemntu has two previous convictions – one for theft and the other for common assault for which he paid a R600 fine.

Motaung, 58, was killed on the morning of October 6 while he was on duty and was ferrying passengers to work and other destinations. He was shot in the back and set alight in Lawley, south of Johannesburg, by men who pretended to be passengers. Passengers broke windows and jumped out of the burning bus.

Stabus blamed the attack on the taxi industry, saying operators have been intimidating drivers for months after commuters who were using trains began using buses when the country went under lockdown in March due to the pandemic. Taxi bosses, however, denied any involvement in Motaung’s killing.

In court, Lerato Motaung breathed heavily when the group entered the dock yesterday. She came face-to-face with her uncle's alleged killers.

"These people say they are breadwinners at their homes, what do they think about the people that this man was feeding?

“I was so sad to see them. I was disappointed that there is a woman among them. How does she sleep at night?”

The matter was rolled over until today.

Gauteng transport MEC Jacob Mamabolo has warned that any taxi association found to have been involved in the killing of a bus driver in Lawley, south ...
News
1 year ago

A supervisor of the bus driver who was brutally killed on Tuesday morning says he is heartbroken after he could not save Neho Motaung, who burned to ...
News
1 year ago

Lawley bus driver was a provider for his family

To many commuters in Lawley, south of Johannesburg, Neho Motaung was a driver who took them from home to work, but to his family, he was a provider ...
News
1 year ago
Next Article