Curfews fail to rein in angry youth calling for reform 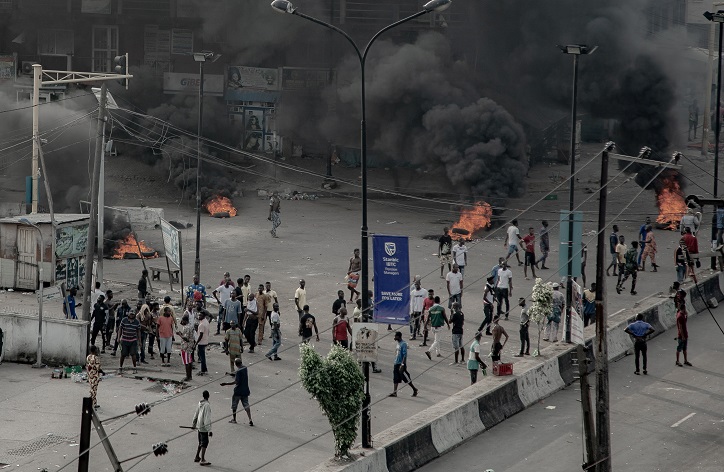 Nigerian cities have descended into chaos as clashes between protesters and law enforcement personnel have become the order of the day.

Despite five states, including Lagos, having imposed 24-hour curfews, thousands of protesters, mainly the youth, have defied the curfew and have taken to the streets in violent protests which have led to properties being destroyed.

The protests, which are organised via social media platforms, began about two weeks ago as the youth in various parts of Nigeria protested against the country's notorious Special Armed Robbery Squad (SARS) police unit which has been accused of extrajudicial killings, mainly targeted at the youth.

"The general shape and picture of the protests has been peaceful. They are very organised. They stayed in line and they even had food and music. They just wanted to have their voices heard by the authorities," Azu said.

However, following the killing of peaceful protesters by the army in two Lagos suburbs on Tuesday, Azu said the protests turned violent, with several properties going up in flames in sporadic incidents in many parts of the country this week.

Azu said ahead of the shooting of protesters, CCTV cameras and street lights were switched off in Lagos making Nigerians believe that the killing of protesters were premeditated. There's no official death toll but reports suggest that 24 people were killed in two incidents in Lagos on Tuesday.

"After the Lagos incidents, the youth has been uncontrollable nationwide, they're looting and there's total lawlessness to the highest level," Azu said.

"A lot of people are not venturing outside anymore because there's total chaos all across the country mainly in major cities."

Azu said there had been reports of killings in parts of the administrative capital Abuja with protesters retaliating on law enforcement personnel.

"What happened in Abuja initially was that people lost properties, with a few of them injured, but now what has subsequently happened was an escalation within two days leading to disruptions. There's skirmishes in a few areas," Azu said.

Lagos was under lockdown on Wednesday as a heavy police presence enforced a round-the-clock curfew, hours after soldiers opened fire on protesters in ...
News
1 year ago

Azu said the protests were now not only about the police's SARS unit but protesters were now calling for reform of the entire government system of Nigeria, including changes to the constitution and raising concerns on how Covid-19 relief funds were spent.

"Demands from protesters have now been expanded to beyond reforming the police force to include total overhaul of recruitment procedures, general security improvement across the country and looking at the control of the state resources," Azu said.

Nigerians in many parts of the world including in various South African cities took to the streets to protests against their country's army shooting at peaceful protesters.

Azu said the protesters remained leaderless, generally driven by youth groups who feel unfairly targeted by the SARS unit which had intensified an operation to stop internet fraud and kidnappings, which are rife in the country.