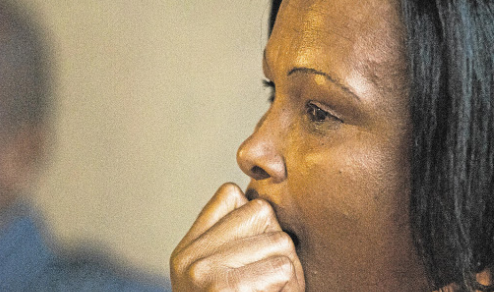 Elizabeth Maubane, sister of W/O Hendrick Monene, who was killed by mineworkers at Lonmin's platinum mine in Marikana in August 2012, says the former provincial deputy police commissioner, William Mpembe, isn't the one who should account for Monene's murder.
Image: File / WALDO SWIEGERS

Hendrick Tsietsi Monene was the first of 44 people killed in weeklong violence Marikana, and his family believe the wrong man is being tried for his murder.

The trial of six people implicated in some of the murders which took place at the Lonmin platinum mine in Marikana on August 13 2012 continued at the high court in North West on Thursday.

But Monene's family believe one of those men, former North West deputy police commissioner Maj-Gen William Mpembe, is not the right person to face the charge.

While it is believed that it was miners who attacked the police, ultimately leading to the death of the Monene, a warrant office, and another officer, it is Mpembe who has been charged for killing Monene and his colleague Sello Leepaku, who was hacked to death that day.

The family said that if Mpembe was convicted it would “never give us closure because the people who killed my brother are the ones who should pay, not Mpembe.”

This is according to Monene’s sister, Elizabeth Maubane, who was speaking to TimesLIVE this week.

Mpembe has also been charged for the murder of a mineworker and the attempted murder of six people who were injured in the clashes.

Mpembe was not the killer....

The former top cop — who had led a large police contingent trying to disperse a group of miners who were armed with an assortment of weapons including knobkerries and spears — is also charged with defeating and obstructing the ends of justice.

This is after it was established that he failed to disclose to the Farlam commission that he had given the order for police to fire teargas and stun grenades into the crowd of protesting miners, sparking the deadly clash between the two sides.

The commission had been appointed to probe the days of unrest at the mine which resulted in the deaths of striking mineworkers, security guards and police.

“While it was said that Mpembe may have given wrong instructions, he never gave them [the miners] the authority to kill my brother. So despite all of this, the perpetrators are still going free ... Mpembe wasn’t the killer,” Maubane said.

Sibanye-Stillwater said it is fulfilling the promises its predecessor made to the widows of the slain mineworkers.
News
1 year ago

Putting Mpembe on the stand to testify would also yield no results for them as he would not be able to answer the real burning questions that they wished to pose to the killers — including why they had killed him.

“My brother was the first person to be killed in Marikana. He had no blood on his hands. He was there to protect those very people that killed him,” Maubane said.

As the trial continues this week, Maubane said the wounds of August 2012 are once again reopened for her family.

“My mom collapsed yesterday and is not well at all. She was not OK after seeing her son’s photo being broadcast on the news as they were reporting about the trial,” Maubane added.

“She is 84 and, yes, while this may have been eight years ago, one will never understand how this has hurt her. I don’t see us reaching closure any time soon, not until the real perpetrators come forward,” she said.

Maubane said the word “Marikana” was one that “made them sick” and hurt them deeply.

While she had religiously attended the commission of inquiry, she is yet to attend the court proceedings but has been following through the media.

The other five accused are charged with the murder of one mineworker, Pumzile Sokhanyile, who was also shot dead that day.

Vermaak faces an additional charge of defeating the ends of justice after he allegedly failed to disclose that he had given the instruction to junior police officers to shoot at Sokhanyile.

The recent start of the trial of six police officers for attempted murder and murder at the North West High Court in Mafikeng has reopened wounds for many in Marikana. It is the first time police officers have stood trial for the gross human rights abuse that took place in August 2012. A total of 47 people died during the course of a miners' strike. Eight years later, victims and families are still searching for justice.

Elizabeth Maubane says her police officer brother has been completely overlooked when people talk about the Marikana massacre.
News
1 year ago

Eight years after the Marikana shootings that left 34 people dead, former Lonmin miner Mzoxolo Magidiwana says for the first time since that fateful ...
News
1 year ago
Next Article