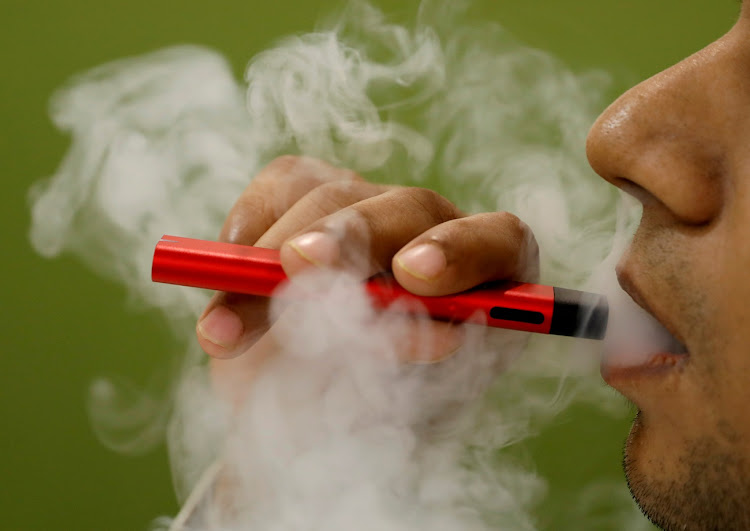 Health experts have warned that if exposure of children to vaping is not stopped early it could have dire consequences to their health.
Image: Reuters/Adnan Abisi

SA needs to move fast to diffuse the ticking time bomb that is harming children in the form of vaping and e-cigarettes.

A leading paedetrician has warned that early exposure to these products could have disastrous effects on children's health.

Prof Anthony Westwood — a paedetrician at Red Cross Children’s Hospital and the department of child and adolescent health at the University of Cape Town — said the pro-child and pro-health draft legislation, the Control of Tobacco Products and Electronic Delivery Systems Bill, needs to happen sooner rather than later.

The bill, which is yet to be passed into law, despite the window for public comments closing two years ago, bans smoking and the use of heated tobacco products, such as vaping devices and e-cigarettes, in enclosed spaces, public spaces and workplaces where there are children.

Westwood said given the health threats that nicotine exposure had on children their health needed to be prioritised over profits.

“We need to make sure that the smoke and mirrors of people who put other priorities first are not given any weight or significant weight against the rights of children,” he said in a webinar hosted by the National Council Against Smoking (NCAS) on Tuesday.

“So we have a chance to diffuse the ticking time bomb for our own society.”

The webinar was to discuss the bill.

One of the ways of discouraging the use of nicotine delivery devices was to remove flavourings or make packaging unattractive as these aspects influenced the early uptake of smoking.

“We have good evidence that not letting young people see and be influenced by tobacco products and other product decreases adolescent uptake and we know we must do that in this country,” he said.

Nicotine exposure not only had adverse effects for their health such as lung disorders, but it also influenced young people’s personalities, including their relationships and their ability to hold down a job.

“So this is extremely serious. We need to get nicotine away from the hands of young brains, as it were. It's also a very active substance, which is a particular problem for babies in utero exposed either to their mothers smoking or inhaling other people's smoke, which contains nicotine.”

Lynn Moeng-Mahlangu, chief director for health promotion and nutrition at the national health department, said the bill, which remains pretty much the same as the 2018 draft except for minor changes to make its wording clearer, is expected to be taken to cabinet before the end this year.

Moeng-Mahlangu said a few government departments must still see the bill before going to cabinet.

According to the World Health Organisation Framework Convention on Tobacco Control, the scientific evidence that exposure to tobacco smoke causes death, disease and disability and places an obligation on countries to implement effective measures to provide protection from exposure to tobacco smoke in indoor public and workplaces, public transport as well as other public places.

While, generally, heated nicotine products contain lower levels of the toxic substances found in cigarette smoke, there is insufficient independent scientific evidence to conclude that they are less harmful than conventional tobacco products as their long- term health affects are as yet unknown. Emissions from heated nicotine products have been found to contain toxicants, metals, nicotine and other harmful substances such as benzene. To protect public health, the WHO suggests that such products should be regulated under tobacco-control laws.

On the other hand the tobacco industry has been accused of investing substantial resources and a range of tactics to weaken and interfere with the comprehensive implementation of the provisions of the WHO recommendations.

Prof Leslie London, public health specialist from UCT’s school of public health and family medicine, said one of the tactics by the industry has been the use of medical doctors as messengers to give credibility to nicotine products.

These doctors portrayed nicotine devices as less harmful. The doctors often marketed these devices as tar-free, but they are silent on the dangers of nicotine, including the fact that it is a neurotoxicant (caused damages to the central nervous system) and is potentially carcinogenic and “is very addictive and is used as a pesticide”.