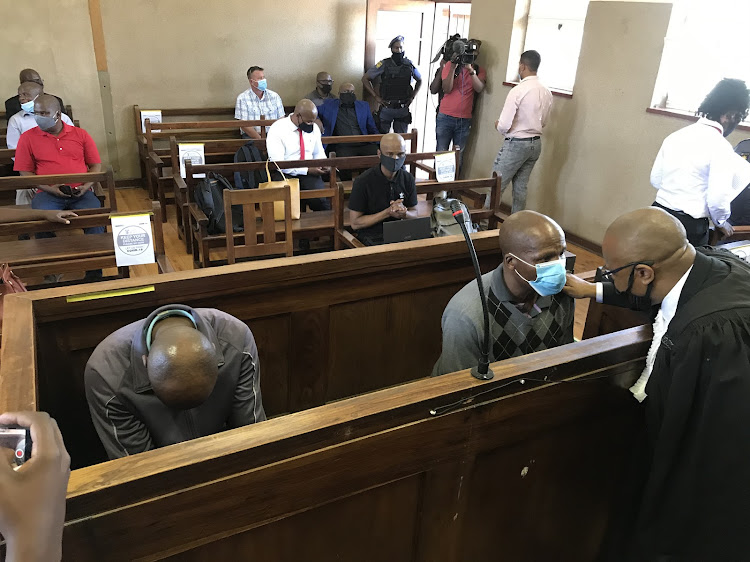 Cpt Gerhardus Myburgh told the court while being cross examined that Sekola Matlaletsa’s brother-in-law allegedly threatened one of the witnesses.
Image: Tankiso Makhetha

A brother-in-law of one of the two men accused of murdering Brendin Horner at a Paul Roux farm allegedly called and threatened one of the witnesses in the matter.

This was revealed during the bail application of Sekola Matlaletsa and Sekwetja Mahlamba in the Senekal magistrate's court on Tuesday.

Without revealing the name of the brother-in-law, Cpt Gerhardus Myburgh told the court while being cross examined that Matlaletsa’s brother-in-law allegedly threatened one of the witnesses.

He told the court that he did not wish to disclose the identity of the person who allegedly threatened the witness because investigations were currently at an early and sensitive stage.

“Yesterday morning I got a call from the witness. She raised a concern that she was in Phutaditjhaba (Qwa Qwa) for a funeral on Saturday and received threats that if she continued to give statements to police her life would be in danger and she wouldn’t see December,” Myburgh told the court.

“We are concerned for her safety and we are working towards getting her into a witness protection programme,” Myburgh said.

The investigating officer in the murder of a Paul Roux farm manager has told the court that one of the witnesses in the matter will need to be placed ...
News
1 year ago

He said when the pair was arrested on October 3, a day after Horner’s murder, they were found to have slight abrasions on their elbows.

Myburgh told the court that blood analysis would confirm whether the blood samples taken from the scene linked them to the crime.

Matlaletsa and Mahlamba are accused of murdering Brendin Horner on October 2 and they were arrested a day later.

Horner’s lifeless body had been tied to a fence and he had a rope around his neck. He had been repeatedly stabbed on the head, shoulder, arm and his hands.

He also had cuts on his right thigh, leading police to believe he had been dragged on the gravel road. His post-mortem revealed he died of strangulation.

Matlaletsa and Mahlamba are accused of killing Horner who caught them while they allegedly tried to steal stock.

The lawyers of the two men accused of the murder of farm manager Brendin Horner have asked the court for at least two days to cross-examine a police ...
News
1 year ago