Army recognises residents for spreading the word on the virus

Alex's Covid heroes get thumbs up from SANDF 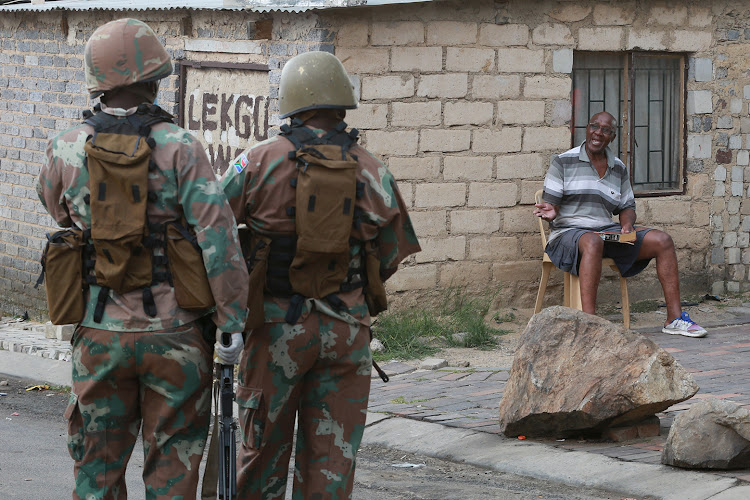 Members of the SANDF patrol the streets of Alexandra, Johannesburg on the first day of the national 21 day lockdown.
Image: Alaister Russell/The Sunday Times

A group of Alexandra residents who risked their lives by ensuring that locals adhered to lockdown regulations in the midst of the Covid-19 pandemic have been recognised for their hard work.

The group, known as 30 Strong Voices of Alex, which volunteered to spread the message about the Coronavirus by visiting homes and encouraging people to observe lockdown rules, received certificates of recognition from the South African Defence Force (SANDF) at the Diepkloof military base in Soweto on Friday.

The certificates were presented to the team by the interprovincial command general, Brig Renier Johannes Coetzee.

According to group leader Simon Sekhitla, their work started on the first Monday after the lockdown was announced by President Cyril Ramaphosa in March.

“A lot of people in Alexandra failed to adhere to lockdown regulations, which was a risk to their lives. We went to the police station to ask for permission to educate the community about Covid-19. We were very lucky because we did not only get the police support but they gave us a bakkie with a PA system. So we were able to drive around the streets of Alexandra making sure that people adhered to Covid-19 regulations by making sure they observed social distance, they wore their masks and they stayed indoors,” said Sekhitla.

Alexandra gogo feeds families who 'fell through the cracks' during lockdown

“I had more than 200 children coming to me and saying they are orphans and they are hungry. I couldn’t turn them away so I started cooking for them,” ...
News
1 year ago

He said some of the group members would walk and even go into people’s houses.

“After the death of Colllins Khosa, who was allegedly killed by members of the SANDF, we decided not to push people inside their houses but teach them about the dangers of Covid-19. During the process, we  met a number of families who could not adhere to the rules because of their situations. For instance, we met a family of 22 members and we had to organise food parcels for them. We were lucky to also get help from Alexandra’s godfather, Linda Twala, who is known for his charity work in the area. That made it easier for us to distribute food parcels to many deserving families,” he said.

Sekhitla said the group's job was not only about walking in the streets of Alex, they also visited malls where they made sure Covid-19 regulations were followed.

He said the certificates of recognition came as a surprise to them.

“We were just doing our bit for our community and we still remain committed to the fight against the spread of the virus,” he said.

Brig Coetzee said it was important for the commanders deployed in the streets to work with some of the community members as this played a vital role in co-ordinating efforts between the soldiers and community members.