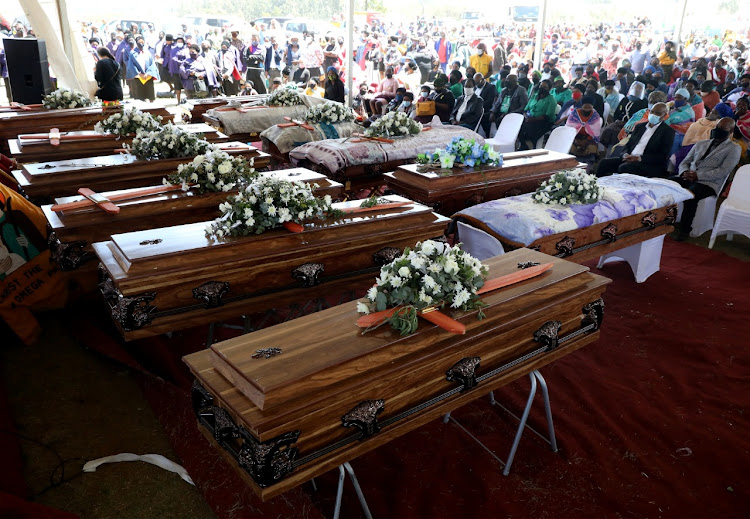 Hundreds of people arrived to pay their respects to the family members killed in the minibus crash.
Image: Sandile Ndlovu

Wails of anguish echoed through a large open tent on a sports ground at Zidweni in the KwaZulu-Natal Midlands as 13 coffins lay before hundreds of mourners on Saturday.

The grieving mourners, tightly packed next to one another, gathered in the scorching heat to pay their final respects to Mlekeleli, Sandile, Zatholani, Njabulo, Nobuhle, Mathumisi and Enzokuhle Mndali as well as Lindiwe, Thabisile and Balungile Dlamini; Nompumelelo and Nhakanipho Nzimande; and Lindelani Sizake who died in a horrific minibus taxi crash near Underberg.

The 13 were relatives, returning from a traditional ceremony last Saturday when their taxi driver lost control and the vehicle crashed down a steep embankment.

While many of those in attendance donned masks, the 1.5m social distancing rule and number of people permitted at funerals under level one lockdown restrictions were flouted.

Level one regulations stipulate that only 100 or less people are permitted at funerals, while outdoor gatherings at faith-based institutions, social events, political events, conferences and meetings or for recreational purposes must be limited to 500 people or less.

Victims of horror KZN taxi crash to be laid to rest

Thirteen people, including a child, who lost their lives in a taxi crash in the KwaZulu-Natal midlands last week will be laid to rest on Saturday.
News
1 year ago

While 500 seats had been arranged to accommodate the family of the deceased, hundreds more gathered on the periphery. Access restricted by a fence line was breached by community members attempting to get closer to proceedings, despite a large contingent of health and law enforcement officials being present.

The provincial government on Friday issued an advisory saying that co-operative governance and traditional affairs minister Nkosazana Dlamini-Zuma, and KwaZulu-Natal premier Sihle Zikalala would “lead a government delegation to attend the funeral service of 13 famliy members who died in a tragic accident in Bulwer this past weekend”.

Dlamini-Zuma, who this week extended the national state of disaster by another month, did not attend the funeral, her office saying she had other commitments.

She had been listed on the programme to deliver the eulogy.

Zikalala made a hasty exit as soon as the crowd began to grow, his office saying he had an urgent provincial executive committee meeting to attend.

Transport, community safety and liaison MEC Bheki Ntuli warned those at the funeral about the possibility of a second wave of Covid-19 infections.

“We hear that scientists say that there will be a second wave. They even say that it can be more dangerous than the first. We know that this disease killed so many people and our condolences go out to these people as the government.”

Ntuli said the death of the 13 members of the Mndali family was an unfortunate, yet unique situation.

“The Mndali situation is unique because we normally go to a mass funeral of different families. We find that people from different families are in a taxi and they die. Sometimes their surnames will be the same but they don't know each other. But in this Mndali family, we found that all the people had come from the same event, from the same family and are relatives. It's unique because we have never buried 13 members of the same family on one day.”

He thanked those in attendance for wearing masks.