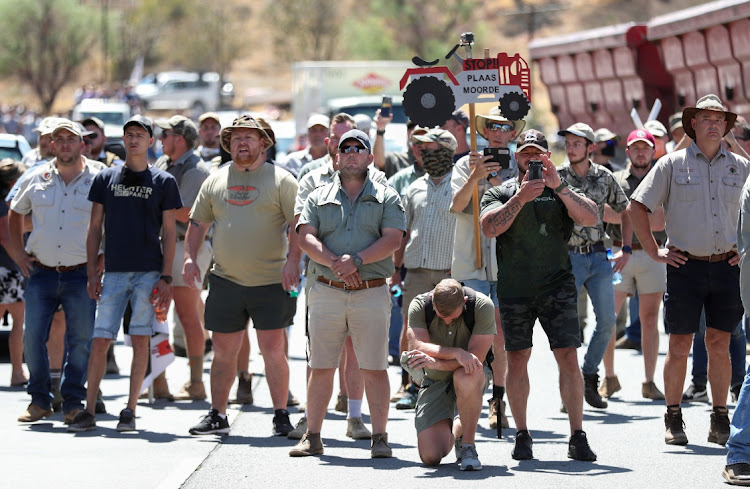 Farmers are gathered in a field near a coffee shop in Senekal, calling for more decisive action against crime in rural areas. Two suspects are appearing in court on Friday in connection with the murder of farm manager Brendin Horner.
Image: SIPHIWE SIBEKO

Only closing arguments by the legal teams and delivery of judgment may be broadcast in the trial of two men in connection with the murder of 21-year-old farm manager Brendin Horner.

TV cameras and photographers will be allowed in the courtroom during the adjournment.

This is after the prosecution asked for the case to be heard in camera, despite lawyers for Sekwetje Isaiah Mahlamba and Sekola Piet Matlaletsa signalling they have no problem with the media having access to the court.

The large media contingent gathered at the court had filed an application before the Senekal magistrate's court to be permitted into court to record proceedings.

The 21-year-old girlfriend of murder accused Skwetja Mahlamba has proclaimed his innocence, alleging she had a solid alibi for where he was on the ...
News
7 months ago

Addressing court, the state prosecutor, who said he did not want his name or face made public, argued the case was currently at a sensitive stage.

The prosecutor told the court the murder investigation was complex. He signalled he wants to protect the identities of some witnesses who will testify during the trial.

The prosecutor said there is also certain information that must not become public knowledge.

The defence, however, argued that there had been more complex matters heard in an open court.

Police minister Bheki Cele was inside court and listening to the proceedings.

21-year-old Brendin Horner was found brutally killed near Paul Roux in the Free State on October 2 2020. While two suspects have been arrested in connection with the killing, investigations are ongoing. MultimediaLIVE takes a closer look at the young farmer's death which has caused chasms in the local community.