Two men 'questioned' for murder of Katlehong girl, 8, as police plead for calm 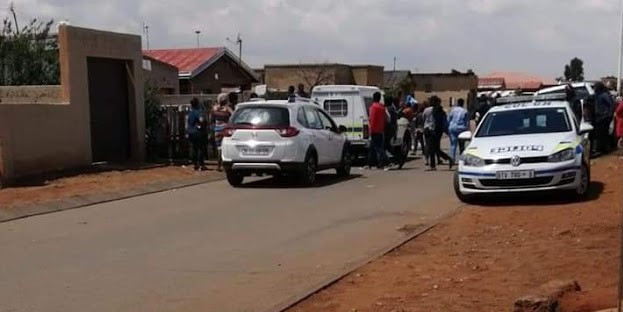 Less than 24 hours after a young girl was reported missing in Katlehong, her body was discovered behind a neighbour's outside room.
Image: Blessings Ramoba via Facebook

Gauteng education MEC Panyaza Lesufi has expressed dismay at the death of an eight-year-old girl whose body was found behind a neighbour's outside room hours after she was reported missing at the weekend.

The girl was a grade 2 pupil at Sekgutlong Primary School in Katlehong, said Lesufi. He said she had allegedly been raped before being killed.

“It is with great sorrow to hear about the disheartening passing of one of our youngest learners at Sekgutlong Primary School. We rebuke the horrifying acts of the perpetrators involved in the death of this pupil, and we wish for the uncompromised safety of all our pupils,” Lesufi.

He said a suspect had been arrested in connection with the murder.

However, police spokesperson Brig Mathapelo Peters said no one had been positively linked to the crime yet.

Less than 24 hours after after an eight-year-old girl was reported missing in Katlehong, southeast of Johannesburg, her body was found dumped behind ...
News
1 year ago

“Two people were taken in for questioning but have not been linked to the murder at this stage,” she said.

“The investigating officer is working around the clock to gather sufficient information and evidence that could lead to the arrest of the perpetrator and a successful conviction in court.”

The latest development comes as the angry community torched the house of a man they accused of being involved in the crime. Police condemned the criminality.

“Police urge the community to give the detectives space to investigate the case that has since been prioritised, as with all cases involving children, women and the elderly,” said Peters.

Gauteng police commissioner Lt-Gen Elias Mawela condemned the killing of the girl and the community taking law into its own hands.

“The investigating officer must move with speed to ensure the person responsible for this gruesome killing is arrested and brought to book. I also urge the community of Katlehong to refrain from acts of vigilantism. Those who have information that can help in the investigation must come forward,” said Mawela.

The child went missing from her home on Sunday.

“On the morning of October 12, members from Katlehong North police were alerted about the body of a child found in Katlehong. On arrival at the scene, police found the little girl's body behind an outside room. Paramedics certified the child dead on the scene.

“Police are investigating the circumstances surrounding the death of the child. The post-mortem will determine the exact course of her death,” Peters said previously.

Lesufi said a psycho-social unit would visit the school to provide the necessary counselling to those who have been affected by the murder.