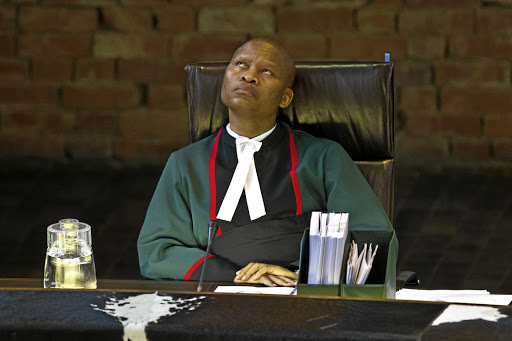 There has been another "security breach" at the Midrand, Gauteng, offices of chief justice Mogoeng Mogoeng.

This time, the apparent cyber-criminals last month breached the IT systems of the office of the chief justice, where the country's judiciary is administered.

It's not clear at this stage what files or information were stolen.

The breach was disclosed by Memme Sejosengwe, secretary-general in the office, during a meeting with the National Assembly's portfolio committee on justice and constitutional development, which was scheduled to discuss their quarterly reports.

This is not the first time criminals have targeted the office of the chief justice. There was a break-in in 2017 when 15 computers containing sensitive information about the country's judges were stolen.

A man was arrested that year but charges were later withdrawn by the police as the case went "undetected".

Sejosengwe told MPs the latest security breach at the office in charge of the country's superior courts took place in September, and law enforcement agencies were investigating.

"May I take the committee into confidence that there was a security breach in our ICT environment which occurred towards the end of September. The matter is under investigation within the multi-disciplinary team of law enforcement agencies of the state," she said.

"I seek the committee's indulgence that we do not discuss this matter further so we don't compromise the law enforcement agencies' investigations and also expose the system more to vulnerabilities and risks, given what has happened."

Pressed by ACDP MP Steve Swart to shed more light on the matter, Sejosengwe committed to briefing the committee once the investigation was completed.

She said they were looking at "upscaling" their ICT infrastructure after the security breach.

The office of the chief justice reported it was facing serious budget cuts due to the shrinking public purse stemming from the economic effects of Covid-19.

According to documents they tabled before the justice committee, Mogoeng's office was facing "compulsory cuts" in its wage bill to the tune of R258m in the next financial year of 2021/2022. There would further cuts of R350m by 2023.

Sejosengwe and her team told MPs this would have affect the general administration of the superior courts, including the high court, the Supreme Court of Appeals and the ConCourt as they would be unable to fill critical vacancies.

Office of chief justice, not Mogoeng, 'responsible for judges' security'

The office of the chief justice, a national department, has moved to clarify that chief justice Mogoeng Mogoeng is not personally responsible for ...
News
1 year ago

Chief justice Mogoeng Mogoeng has argued that judges should not be forced to pretend they don't hold strong views on religions to which they ...
News
1 year ago
Next Article