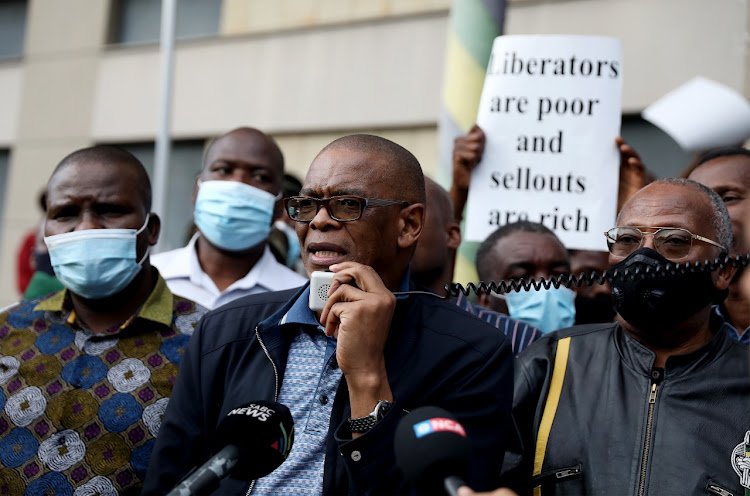 Magashule — who the grouping largely supported and applauded — fired a broadside at the minister without mentioning him by name.

“You are important, MK is important. Those who have not fought for freedom, those who don't know MK and the contribution of Umkhonto we Sizwe in our struggle, will always undermine MK,” said Magashule.

In the background, MKMVA members shouted Mbalula's name as if to affirm that Magashule's statements were directed at the minister. Magashule was speaking outside the ANC offices in Durban after he met the leadership of the MKMVA, taxi industry representatives, hawkers, unemployed graduates and NGOs.

Mbalula on Monday attacked Magashule and some MKMVA leaders — including its president Kebby Maphatsoe and spokesperson Carl Niehaus — on Twitter.

The minister has claimed that he was being targeted by a MKMVA grouping, led by Maphatsoe and Niehaus, over security tenders he cancelled at the Passenger Rail Agency of SA (Prasa).

“I am chased by criminals. Carl Niehaus is a well-known suspect, I don't know how but it is well documented, he faked the death of his mother. I mean, he is about to fake his own death,” said Mbalula.

Mbalula said Magashule had hired Niehaus at Luthuli House, but his job description was unknown “as he only organised marches”. He said they were part of a plot which had targeted him.

Both Niehaus and Maphatsoe have hit back at Mbalula over his rant on Monday, with the MKMVA president saying Mbalula would not speak at any ANC event until he had apologised for branding them as thugs. “Wherever he is, we will make sure that he stands up and apologises in front of the people. If he does not do that, he will never address any meeting,” Maphatsoe was quoted saying.

Niehaus on Twitter slammed Mbalula, saying he should not call MKMVA members thugs because they were much older than him. “Some of these cadres are old enough to be your parents. These are cadres who sacrificed their lives for our freedom, yours too, and are suffering neglect and poverty. Respect!” he tweeted.

In his address on Tuesday, Magashule said he had heard concerns raised by KZN MKMVA members.

“We respect them, we respect the MK. We know that there are MK people who are complaining that 26 years after freedom they don't have houses, they don't work and we are in parliament, driving nice cars and eating well,” said Magashule.

The mayor and councillors of Hantam local municipality are accused of utilising official subsistence and travel allowances to attend the ANC ...
News
1 year ago
Next Article