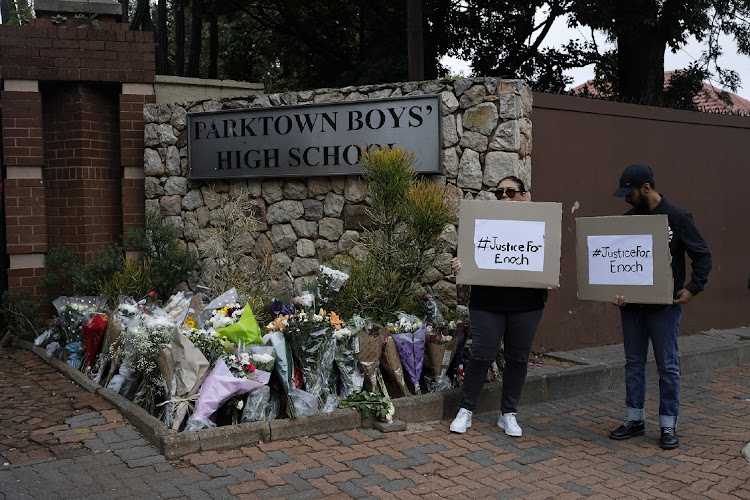 The family of Parktown Boys high pupil Enoch Mpianzi who drowned at a school excursion in January feels the department of education is trying to clean its reputation by firing the principal.

The department yesterday announced that Parktown Boys principal Malcom Williams was dismissed for the January 15 school orientation camp which was held at Nyati Bush lodge and River break in North West.

The 13-year-old Grade 8 pupil drowned and was found far from where the school activity had started.

Enoch's uncle, Sebastian Kodiemoka, said there was nothing to celebrate about the principal’s dismissal.

“His dismissal may be that the department is trying to clean up its reputation. A crime was committed on the South African soil. SA has got a judiciary system and we gave our files to our lawyers so we are still waiting for the outcome of the court,”  Kodiemoka said.

The Mpianzi family lawyer Ian Levitt said the dismissal of the principal should have happened a long time.

The family is suing the education department, the Nyati Bush and River Break lodge and Parktown Boys' High principal Malcolm Williams for R10m in ...
News
1 year ago

“The court case is still continuing and we have summoned both the department and Gauteng education MEC Panyaza Lesufi,” he said.

South African Humans Rights Commission’s Buang Jones said while the department had not officially communicated the outcome of their internal disciplinary inquiry to the commission, they welcomed reports that the school principal was dismissed.

“We hope this outcome will serve as a lesson to stakeholders in the education sector to scrupulously observe all rules and regulations pertaining to school excursions,” Jones said.

Education spokesperson Steve Mabona said Williams was charged with three allegations of misconduct emanating from an incident where he unjustifiably prejudiced the administration, discipline or efficiency of the department.

Mabona said it was alleged that Williams undertook or caused the school to undertake an excursion to Nyathi Bush and River Break in Brits for Grade 8 orientation camp without prior approval.

"The second allegation is that he failed to ensure that a correct roll call for all learners who went to the said excursion was maintained.

"The final allegation is that he endangered the lives of the learners by disregarding a set of safety rules and regulations as set out in clause E of Safety Measures, in that he failed to ensure that all learners who were to participate in the water activities were provided with life jackets, which led to the death of Enoch Mpianzi," Mabona said.

Mabona said it was important to note that the principal was found guilty of the first two allegations, and subsequently not guilty on the third allegation.

"The presiding officer has, after careful consideration of mitigating and aggravating circumstances, dismissed him accordingly.

"Therefore, he has a right to appeal to the  member of the executive council (MEC) against the findings by the presiding officer within five working days of his receiving of the dismissal notice," Mabona said.