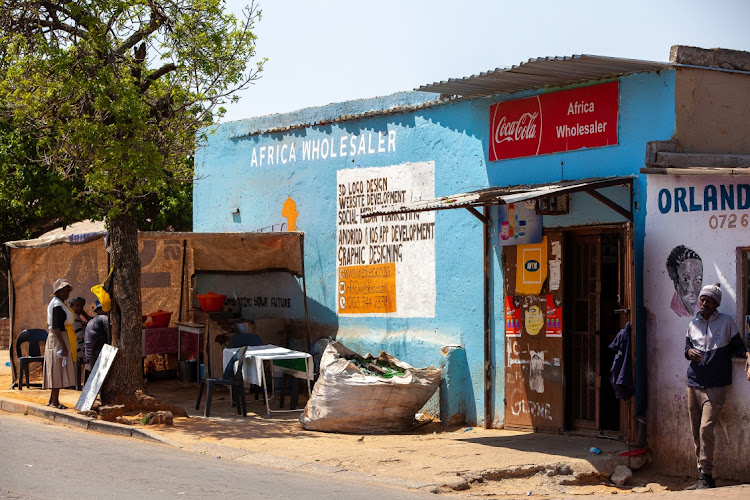 A general view of informal businesses on September 29, 2020 in Soweto, South Africa. It is reported that a new Township Bill promises to bar foreigners from doing business in Gauteng townships unless they have successfully applied for residency status in South Africa.
Image: Gallo Images/Papi Morake

A bill that could restrict businesses of foreign nationals in Gauteng townships has been flagged as having the potential to increase xenophobia, but there is some support for it as a means to achieve an inclusive economy nationally.

The Gauteng government introduced the Gauteng Township Economic Development Bill for public comment recently. If passed, the  draft bill could restrict where foreign nationals may set up formal and informal businesses in SA’s economic hub.

The bill, which has been described as unconstitutional by a pro-migrant lobby group, is intended to designate township areas as places that are “reserved for the exclusive and sole [benefit] of citizens and people who have permanent residency status in the republic”.

“These include... the focus on facilitating inclusive growth in townships through improved access to finance, technology and support, as well as improving data collection and availability,” said Kingston.

“However, B4SA would be concerned around provisions similar to section 7(2) of the bill, which restricts designated business activities to citizens or permanent residents, and would urge reconsideration of similar provisions.”

Kaajal Ramjathan-Keogh, Africa director of the International Commission of Jurists, said the bill would prohibit most non-citizens such as asylum seekers and refugees from large swathes of economic activity.

“Whatever the specific exclusions the bill ultimately includes, it could well increase existing xenophobic sentiment and could result in recurrences of xenophobic violence,” she said.

Banning foreigners from business in Gauteng townships will be a disaster: experts

Rather, the province should be coming up with solutions on how to integrate them into the economy, they say.
News
1 year ago

“We are also going to join them soon. [A similar] bill [at national level] will be processed through a parliamentary exercise,” she said.

DA national spokesperson Solly Malatsi said the matter will have to be discussed in the party’s caucus before deciding whether to support it.

IFP chief whip Narend Singh said rural and township economic development required political will more than legislation but “we will support such a bill if it comes before parliament”.

UDM chief whip Nqabayomzi Kwankwa said his party will support the bill at national level “so long as it is not done in a manner that is discriminatory”.

Sabelo Macingwane, national president of one of the largest business chambers in SA, the National African Federated Chamber of Commerce and Industry (Nafcoc), said the bill was “a trailblazing piece of legislation” that the rest of the country should adopt.

African Diaspora Forum spokesperson Amir Sheikh said if the government implemented the bill nationally, they would challenge it in court.

“It is an attack on migrants’ interests, and we have seen in some parts of SA where migrants have come under attack after being told they are not meant to trade in townships,” he said.

Gauteng premier David Makhura’s spokesperson, Thabo Masebe, said the bill was not about foreign nationals, but a “development bylaw” aimed at assisting entrepreneurs in the province’s townships to start and operate their businesses.

It remains to be seen if banning foreigners from operating certain businesses in Gauteng townships will improve participation of locals in this area ...
Opinion
1 year ago
Next Article