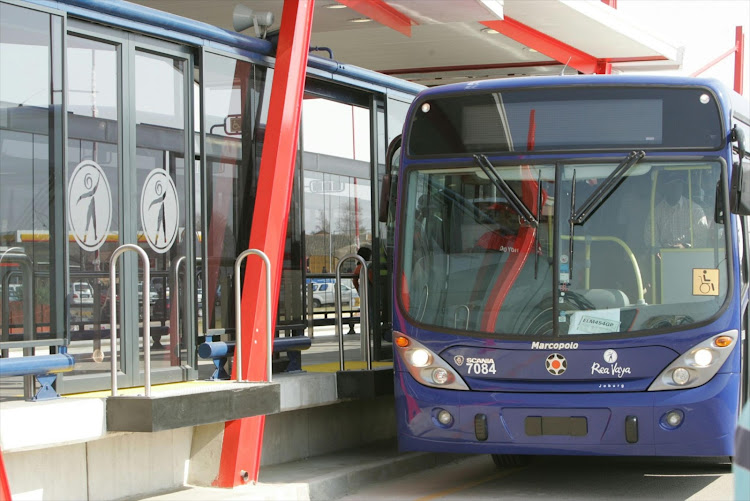 A Rea Vaya bus. The City of Joburg is looking at public transport to try to alleviate the congestion problems the city faces.
Image: Antonio Muchave

In an effort to reduce traffic congestion, the City of Joburg (CoJ) is planning to replace some of its minibus taxi services with the Rea Vaya Bus Rapid Transit (BRT) system, with owners of the affected taxi services becoming shareholders.

Mokasi said their work was made more difficult as they have to police the city's 2,121 intersections with only 260 traffic officers and 93 vehicles.

Location technology company TomTom early this year released the results of its latest Traffic Index, detailing the traffic data of 416 cities in 57 countries.

TomTom named Cape Town as the city with the worst traffic in the country (101st), followed by Johannesburg (121st) and Pretoria (207th). East London is fourth followed by Durban and Bloemfontein.

City of Johannesburg director of planning and policy development Daisy Dwango said Joburg contributed 56% to national carbon emissions and the transport sector has the highest demand for energy (67%).

She said the city’s short to medium plan was the stabilisation of provincial subsidised bus services and the metro bus system, aligning fare management system with that of Rea Vaya.

PODCAST | Traffic jams are back! What now?

She said they were also looking at introducing a cycling programme for university students and school pupils, which would involve an increase in the availability of bicycles, making cycling “cool” through awareness and mindset change and amending relevant technical roads standards and planning requirements.

Dwango said they were also looking at promoting ride-sharing and promotion of flexitime, variable working hours and trip reduction.

“We are looking at restricting entry of certain vehicles into certain areas and/or at certain times,” she added.

As part of the traffic management and intelligent transport systems, Dwango said the city was looking at improvements to signalised intersections, such as:

A report by the transport directorate in the City of Cape Town states that traffic congestion costs the city R2.8bn a year. The failure of people, goods and services to reach their destination in time leads to lower jobs growth, loss of productivity and decreased attractiveness for investment.

Deputy police commissioner Bonang Mgwenya has been granted R20,000 bail after being arrested in connection with a 2017 multimillion-rand tender ...
News
1 year ago
Next Article