Workers draw line in the sand 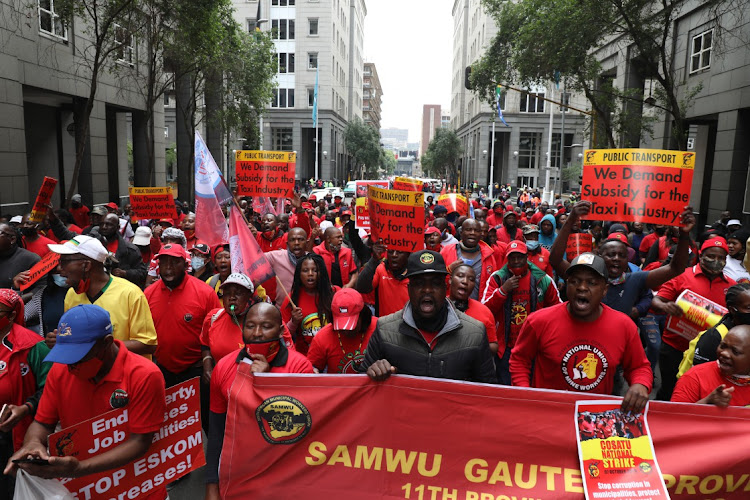 COSATU, SAFTU FEDUSA and NACTU with their affiliates marched to the Gauteng Legislature in Johannesburg during the nationwide strike to protest against the loss of jobs, corruption and gender based violence.
Image: Thulani Mbele

Workers living on the East Rand townships working in Johannesburg used to spend just under R20 daily to get to work and back, but in the absence of trains they spend in excess of R60.

Following the gross vandaliasing of train facilities by copper thieves and other criminals during the lockdown, Katlehong and Thokoza township train commuters have seen the transport costs triple.

Recent retiree Trevor Hobe told Sowetan that it cost him just R18.50 to get to Johannesburg and back using Metrorail trains. He says he now pays R64 using taxis as he and hundreds of workers have no other alternative.

Hobe had relied on trains throughout all his working life.

The non-availability of affordable public transport was one of the issues that were central to the Cosatu national strike yesterday, which saw workers protesting in almost all major cities.

The workers embarked on a national strike in protest over issues that included job losses, shortages of  Covid-19 personal protective equipment, corruption, unemployment and gender-based violence.

She said they wanted a public transport system with an improved efficiency, protection of commuters and workers.

"We stand united in demanding...proper subsidisation of public transport, particularly taxis and  trains which are the main means of transport for the poor and the working class," Losi said.

She said they also wanted to see the 2010 Fifa World Cup-style courts established to deal with corruption speedily and effectively.

Losi also warned workers not to allow themselves to be used to protect those charged with corruption.

"We are not going to be mobilised as workers on certain cases of certain individuals where it's said we should do vigils at courts. We shouldn't allow that comrades," Losi said.

She called on those facing corruption allegations to go and have their day in court to defend themselves there and not make allegations of there being conspiracies against them.

Transport minister Fikile Mbalula and labour and employment minister Thulas Nxesi accepted the memorandum and apologised for finance minister Tito Mboweni and his deputy, who could not make it as they were at a cabinet lekgotla which was discussing the budget.

Kenneth Mtsweni, a product analyst at StatsSA, said he was at the march because of the non-payment of public sector salary increases this year, which have downgraded his lifestyle significantly.

"My purchasing power has decreased quite a lot; prices are going up everywhere and I am worse off compared to last year," Mtsweni said.

Life without trains tough for commuters

Rail commuters are living on a shoe string budget after being forced to use expensive taxis due to the suspension of trains in Gauteng.
News
1 year ago
Next Article