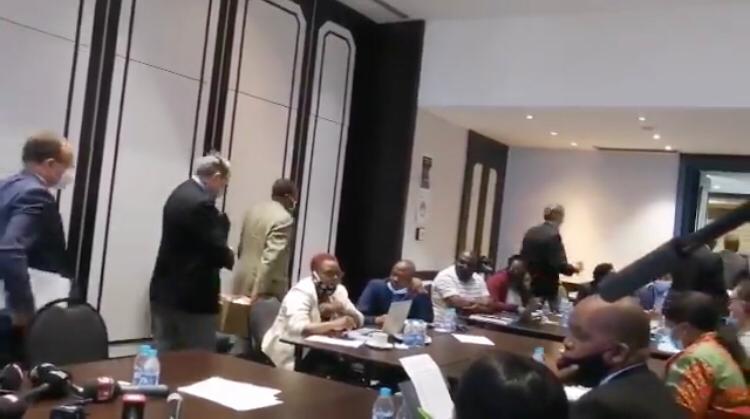 Lawyers representing the KwaSizabantu mission walk out of a commission hearing on Wednesday after asking for the head of the commission to recuse himself.
Image: Lwandile Bhengu

The investigation into allegations of sexual assault at KwaSizabantu mission came to an unexpected halt on Wednesday after representatives of the mission refused to testify unless the commission's chair recused himself.

The Commission for the Promotion and Protection of the Rights of Cultural, Religious and Linguistic Communities (CRL) began its three-day probe into the allegations of sexual and religious abuse at the KwaSizabantu mission in northern KwaZulu-Natal on Monday.

On the third and final day, representatives of the mission were expected to appear to respond to a media expose in which people who were once affiliated with the church spoke about allegations of physical and sexual abuse.

However, on Wednesday, mission representative Keith Matthee asked commission chairperson David Luka Mosoma to recuse himself. Matthee said they believed Mosoma was biased after a broadcast interview on Tuesday where he commented that what was happening at the mission was not religion.

Matthee said the mission felt that this showed bias against the church and, as such, they would not get a fair chance to defend themselves.

Mosoma said he was merely giving a summary of what witnesses had said and was not passing judgment on the mission.

“What is here, is what comes from the mouth of the people who testified. I was giving a summary because I was asked to give a summary of what we heard. That is why I used the words 'if corroborated' because this summary, even the issue of God and a hurtful God, does not come from me,” said Mosoma.

In response Matthee said from the chair's interview, a perception had already been created that they would not get a fair hearing.

Representatives of #KwaSizabantu have left the CRL commission after the chairperson refused to recuse himself. They said that they needed more time to consider their options as they were not comfortable with proceeding with the chair present @TimesLIVE @yasantha pic.twitter.com/GZNLFMr6sm

“The legal test is perception and I would like to put it on record that the people of KwaSizabantu, in light of the interview that you gave, feel that they will not get a fair hearing from you or the commission, based on what you said,” said Matthee.

“I want to reiterate that we do respect chapter 9 institutions, and if one day you apply yourself to the teachings of KwaSizabantu, they seek to commit themselves to the teaching of scripture and scripture clearly says that we are to respect and submit to authorities.”

After the chairperson refused to recuse himself, Matthee and his team walked out of the  proceedings, saying they needed time to consider whether they would appear before the commission in light of the chair's refusal.

In closing, Matthee said they were fully co-operating with the police, who he said had visited the mission, adding that the commission had no real authority over the criminal allegations against them.

The commission said it needed to time reflect on a next step.

Investigation into KwaSizabantu mission kicks off with rape and murder allegation

Compelling evidence from a witness blew the lid open on allegations of rape and murder at KwaSizabantu mission in northern KwaZulu-Natal on Monday.
News
1 year ago

A former pastor at the KwaSizabantu mission broke down on Tuesday as he told the CRL Rights Commission about the way the mission treated children.
News
1 year ago
Next Article