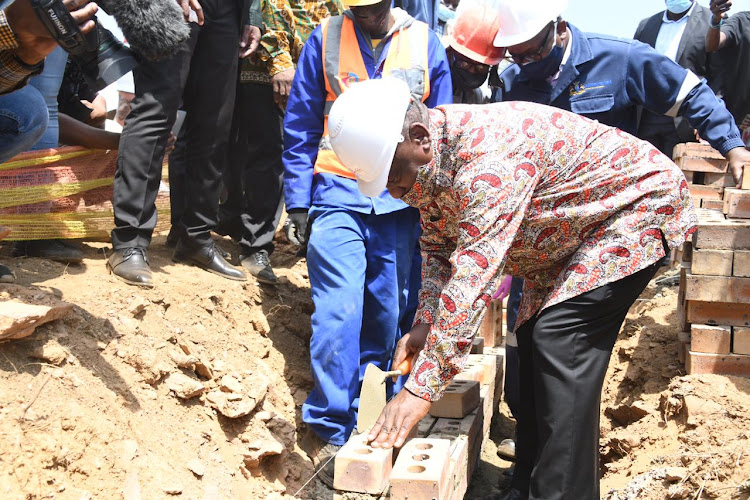 President Cyril Ramaphosa at the site of the Mooikloof development on Sunday.
Image: GCIS / Siyabulela Duda

President Cyril Ramaphosa's endorsement of the R84bn Mooikloof MegaCity Development is a slap in the face, the South African Institute of Black Property Practitioners (SAIBPP) said on Monday night.

Ramaphosa officiated at the launch of the mega-development in Tshwane on Sunday. Speaking at the launch, Ramaphosa said the project was one of 62 strategic integrated projects (SIPs) which were gazetted at the end of July.

He applauded the developers, Balwin Properties, the Gauteng government, and Tshwane for their roles in bringing the project to life “within such constrained time frames”.

“The first phase of the project is residential developments, and some 50,000 sectional title units are planned. Once completed, the Mooikloof MegaCity may end up becoming the world’s largest sectional property development, with land also earmarked for schools, shops and offices.

“This housing development addresses what may be referred to as the ‘housing missing middle’ — people who earn too much to qualify for fully subsidised housing but who don’t earn enough to afford debt-financed housing in areas of their choice. But by far the most important aspect of this catalytic project is its contribution to inclusionary housing development,” said Ramaphosa.

However, the black property practitioners slammed Ramaphosa's endorsement of the project, citing a lack of transformation and disregard of BBBEE policies in the property/construction sector.

“The property and construction sectors continue to be hamstrung by chronic lack of transformation. Black ownership within the R6-trillion property sector sits at less than 7%, and black developers continue to be constrained by lack of access to finance and lack of access to land while companies that demonstrate blatant disregard for BBBEE and transformation benefit from grants and assistance made possible by public funds.

“The public endorsement of this development and its inclusion as part of the SID targeted list of projects is a slap in the face to all patriotic South Africans who are committed to structurally transforming our economy, and demonstrates, once again, government’s unwillingness to address the issue of transformation in the property sector and built environment,” said the group's president Tholo Makhaola.

The SIBPP said the effects of Covid-19 on the economy had been devastating, and acknowledged that the project would create “short-term” employment opportunities. It said, however, such projects must “not be at the sacrifice of the long-term transformation”.

Ramaphosa said the project was expected to create 41,000 much-needed jobs.

Despite the concerns, SIBPP said it supported similar projects provided they were inclusive. “We continue to support this much-needed investment drive and reiterate that as we rebuild the economy, that no person, especially the many black professionals in the property and built environment sectors, should be left behind,” said Makhaola.

The group called on Ramaphosa's office to implement a rule that all companies that participate in the SID programme, and who have submitted projects as part of SID, must be able to produce at least a level 2 B-BBEE certificate. It said that if this was not the case, then all companies participating in the programme should demonstrate how they intend to partner with, joint-venture with, or ensure meaningful economic and skills transfer during and after the project.

President Cyril Ramaphosa has launched a multibillion rand housing project in Tshwane which will yield 50 000 units in prime land of the capital.
News
1 year ago

The SACP in KwaZulu-Natal has thrown its weight behind President Cyril Ramaphosa’s anti-corruption crusade and endorsed the heartfelt call by the ...
News
1 year ago
Next Article