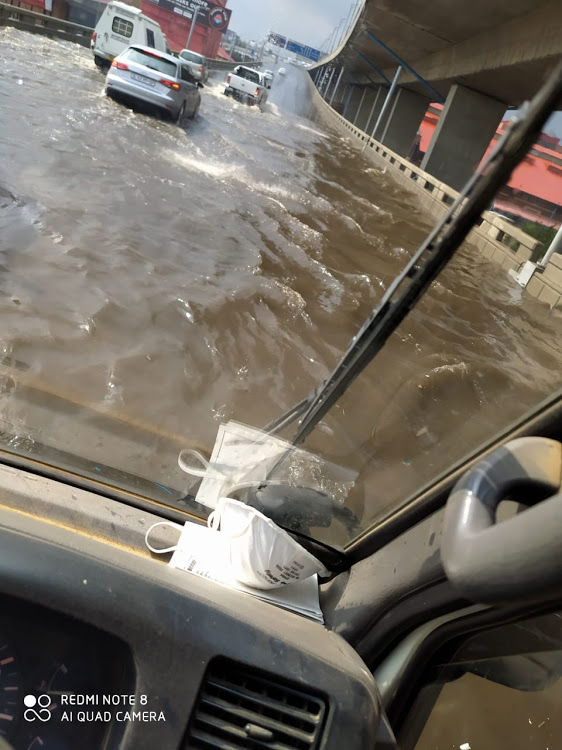 Roads in Johannesburg were flooded on Monday during heavy rain.
Image: Supplied

Emergency services in Johannesburg remain on high on alert on Tuesday with more stormy weather expected this afternoon.

Joburg Emergency Services spokesperson Robert Mulaudzi said they are monitoring the situation in low-lying areas in the city and most informal settlements.

He said emergency service personnel were already stationed in areas in the city where flooding is often experienced. He said the areas included Zandspruit, Sjwetla in Alexandra and Diepsloot.

“We have not had to move people from low-lying areas after yesterday's rain. We have not experienced rivers overflowing, but we are monitoring the situation. Should the need arise to move people, we are ready to do so,” he said.

Mulaudzi advised motorists not to drive on flooded roads.

“If you see a flooded road, drive back and find an alternative route,” he said.

He said the only fatality in Johannesburg was a woman who was struck by lightning in Melville yesterday.

“The woman was struck by a lightning on 2nd Avenue and was declared dead on the scene,” he said.

ER24 reported the death of a 30-year-old man in Elandsfontein, south of Johannesburg, who was also struck by a lightning yesterday.

Severe thunderstorms can be expected to continue on Tuesday, warns Weather Service

The SA Weather Services (SAWS) has warned that severe thunderstorms will continue in some parts of the country on Tuesday.
News
1 year ago

A new weather warning service is expected to be introduced across the country, the SA Weather Service said on Monday
News
1 year ago
Next Article