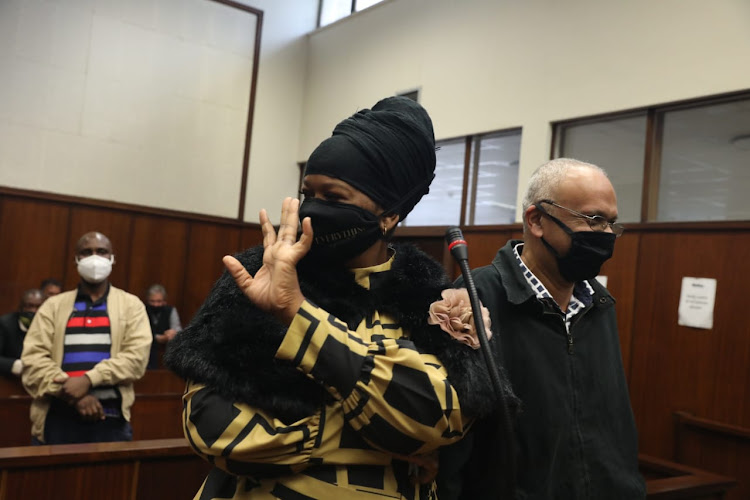 Retired KwaZulu-Natal police commissioner Mmamonnye Ngobeni waved to journalists and posed for photographs when she entered the Durban magistrate's court dock for her alleged role as an “accessory after the fact” in corruption and fraud relating to a police tender.

“Say cheese,” she said before sitting down next to her co-accused Aswin Narainpershad, who handed himself over to police on Monday morning.

They are accused of corruption linked to 2010 Fifa World Cup police tenders involving about R47m.

All four have been charged with multiple counts of corruption, while three of them face five counts of fraud, two counts of forgery and one count of uttering (when a person offers as genuine a forged instrument with the intent to defraud).

The court heard on Monday that Ngobeni was charged as an accessory after the fact relating to the World Cup tenders amounting to R26m.

According to the charge sheet, Panday paid for Ngobeni's husband's birthday party in 2010. Louw explained that Ngobeni was charged with defeating the ends of justice as she ordered investigators to stop their investigation into tender fraud - and that as a high-ranking officer it was her duty to report fraud and criminal activity.

Louw said while bail was unopposed, the state believed that Ngobeni's bail should be set at R40,000 as she was “not any police officer”.

“She was the head of police and had a bigger duty to serve the community and see justice through,” she argued.

Ngobeni's lawyer Ravindra Manicklal argued that his client was retired and had raised only R10,000 for bail as an arrangement had been made with the state on Friday. He also argued that the state's case against Ngobeni was unconstitutional, as a 2014 decision not to prosecute her was never reviewed.

He said only a national director of prosecutions had the power to review the matter and that because it was not done in Ngobeni's case, the case against her was irrational, irregular and unconstitutional.

He later told journalists that Ngobeni was surprised to be charged as she was aware that a review had not been conducted.

Ngobeni was granted R20,000 bail and Narainpershad was released on R10,000. They will appear in court on November 11.

A former ANC MP is among four people, including a bank employee, arrested for fraud and corruption relating to a R4.8m farming tender in ...
News
1 year ago

A Free State woman and man, who were operating a vehicle dealership, have each been sentenced to 10 years’ imprisonment for inflating car prices.
News
1 year ago
Next Article