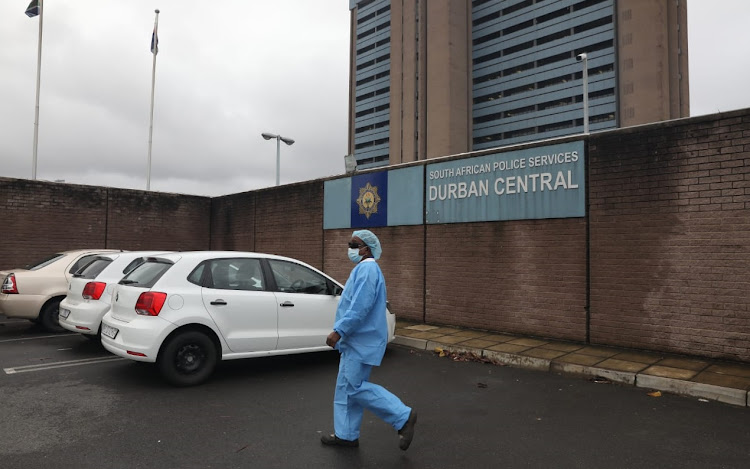 A former policeman (not pictured), implicated in corruption relating to a multimillion-rand police tender, has handed himself over at Central Police Station on Monday morning.
Image: Sandile Ndlovu

A former policeman, implicated in corruption relating to a multimillion-rand police tender, has handed himself over at Central Police Station in Durban on Monday morning.

The 52-year-old arrived at the police station with his attorney.

A warrant of arrest was issued on Friday. It is believed that he was in Cape Town at the time.

The third accused, a policeman, in #ThoshanPanday matter has handed himself over at the Durban Central Police station. The fourth accused, a former top ranking officer will hand herself over at 9:30am. They will apply for bail at 11:30am. @TimesLIVE

A former top ranking officer is expected to hand herself over at 9.30am.

Both will appear in the Durban magistrate's court at 11.15am.

All four had all been charged with multiple counts of corruption, while three of them face five counts of fraud, two counts of forgery, one count of uttering (when a person offers as genuine a forged instrument with the intent to defraud).

According to the charge sheet, Panday, Madhoe and a third accused, who is a police captain attached to the Supply Chain Management Services, “actively associated themselves with the common purpose and worked together to manipulate the procurement process to ensure that the common goal of the orders or contracts were awarded to a specific supplier”.

The fourth accused is accused of ordering the investigation into Panday's contracts to be stopped.

According to the charge sheet, Panday paid for the policewoman's husband's birthday party in 2010.

Accused 4, being a person who holds a position of authority, who knew or ought reasonably to have known or suspected that any other person has committed the offence of theft, fraud, involving an amount of R100,000 or more had a responsibility to report such, it states.

“Accused 4 at no stage declared her relationship with Panday, nor the gift or sponsorship she received from him in the manner of a surprised birthday party for her husband.”