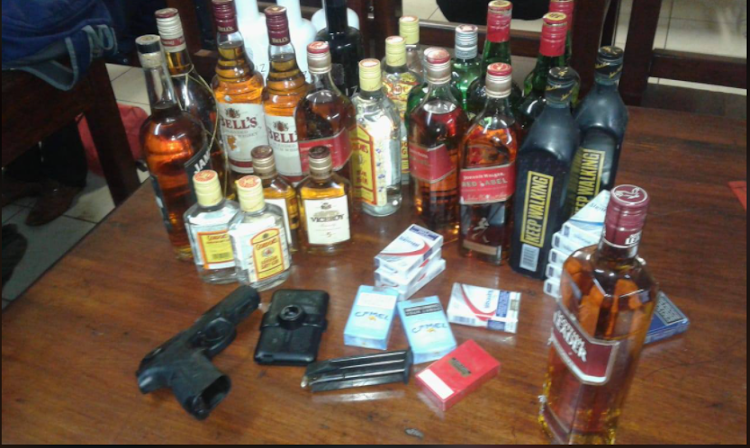 Some of the suspected stolen goods seized by police.
Image: Supplied

Police in Mpumalanga arrested four men with firearms and suspected explosives at Malelane on Saturday morning.

The four are suspected to have been involved in a robbery at a bottle store earlier on Saturday in which cash, liquor, cigarettes  and other items were stolen.

“The arrest came after police were busy with their routine patrol on the N4 national road when they noticed a blue VW Golf and instructed its driver to stop. One occupant alighted from the vehicle and disappeared into the nearby bushes and that made police suspicious.

“The police searched the vehicle and discovered liquor, packets of cigarettes as well as cash stashed inside a bag. Police also found some devices, three firearms and ammunition  and immediately arrested the suspects,” police said.

“Preliminary investigation has since revealed that after midnight, a business burglary occurred at a bottle store in Mjejane Trust near Malelane, where liquor, cigarettes and other items, including cash were stolen. Police also learnt that during the burglary, a safe was detonated with some explosives and money stolen,” police added.

A 67-year-old man was arrested after Cape Town law enforcement officers discovered a large cache of firearms, ammunition and explosives in Somerset ...
News
2 years ago

The women arrested for allegedly smuggling explosives worth more than R1m into SA will be spending a few more weeks behind bars, police said on ...
News
2 years ago
Next Article