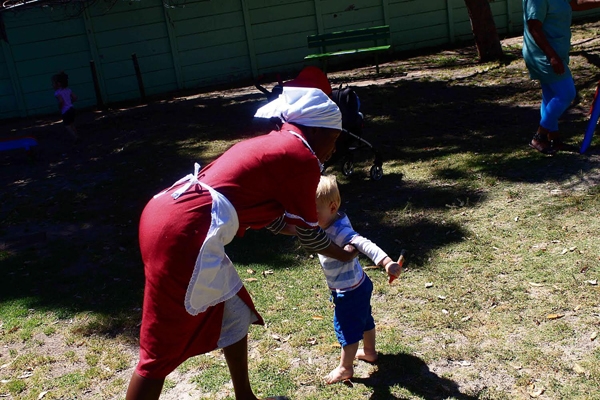 Hundreds of thousands of domestic workers lost their jobs during the lockdown.
Image: GroundUp/Masixole Feni

More than 250,000 domestic worker jobs were lost between the first and second quarters of 2020.

This is according to the latest data from Stats SA which shows a decline of 259,000 domestic workers in employment in the second quarter (April to June) compared to the first quarter of this year (January to March).

Under Covid-19 lockdown level 5, which came into force on March 26, domestic workers were required to stay home and not work, unless they lived with their employers. These regulations were only relaxed on May  24, under level 3. Employers were encouraged to pay workers who could not work, but not all employers did so, and many domestic workers lost their jobs during that time.

According to the Quarterly Labour Force Survey, over the year to June, 250,000 domestic worker jobs were lost — a drop of about 25%.

Total employment in private households, which includes gardeners, private security guards, butlers, pool cleaners and drivers as well as domestic workers, dropped by 311,000 between the first and second quarters.

Assistant general secretary of the SA Domestic Service and Allied Workers Union (SADSAWU), Eunice Dhladhla, says the number of domestic workers who lost their jobs during the lockdown may even be higher.

“I believe that it’s more than 259,000, because a lot of the domestic workers who lost their jobs were not included in that survey. But it’s still very sad.”

She says many domestic workers have told the union that they were “dismissed over the telephone without any reason”.

“Some of the workers were informed that they were being dismissed because their employers were unable to pay them due to the lockdown, but the majority of them were dismissed without an explanation.

“Most of the domestic workers are single parents. Their families are dependent on them for food, money, clothes, schooling and everything, only to find out at the end of the month that they have no money or job.”

The Quarterly Labour Force Survey also shows that the total number of people with jobs dropped by 2.2m to 14.1m in the second quarter compared to the first. “This unprecedented change is the largest quarter one to quarter two decline since the survey began in 2008,” says Stats SA.

Stats SA says 2.2 million jobs were lost in the second quarter of 2020 during the lockdown.
Business
1 year ago

SPONSORED | Gumtree has helped fill more than 100,000 job vacancies in the past year
SebenzaLIVE
1 year ago
Next Article