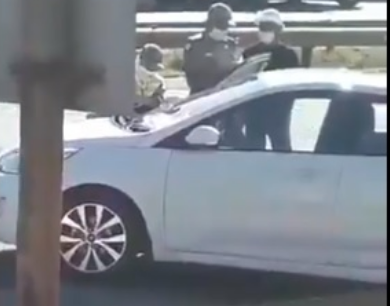 A Gauteng traffic cop was caught on camera allegedly taking a bribe from a motorist on the R59 near Alberton on Monday.
Image: Screengrab of the video

A Gauteng traffic cop is in hot water after a video of him allegedly taking a bribe went viral.

The officer was caught on camera allegedly taking a bribe from a motorist on the R59 freeway next to Alberton on Monday.

Gauteng traffic department spokesperson Sello Maremane confirmed they had been made aware of the video on Tuesday morning and that the matter was under investigation.

He said the department viewed bribery and corruption as “unethical and unprofessional”.

TAXI OPERATING ILLEGALLY? NO FEAR! JUST PAY YOUR RESPECTS & U CAN CONTINUE ENDANGERING THE LIVES OF THE COMMUTERS. THIS WAS EARLIER ON THE R59 AFTER SOUTH RAND ROAD. SOUTHCREST. ALBERTON. COE. GP. @SAPoliceService @GTP_Traffstats @GautengProvince @FaithMazibukoSA @cci_network pic.twitter.com/xJ2ugKk12T

“The Gauteng traffic police expect its officers to conduct themselves in an ethical manner and with the highest form of integrity,” said Maremane.

“Such conduct does not only negatively impact on the public confidence in the Gauteng traffic police but also undermines our efforts towards making Gauteng a safe and secure province for all citizens.

“Due processes and corrective measures will be followed once the investigation has been concluded.”