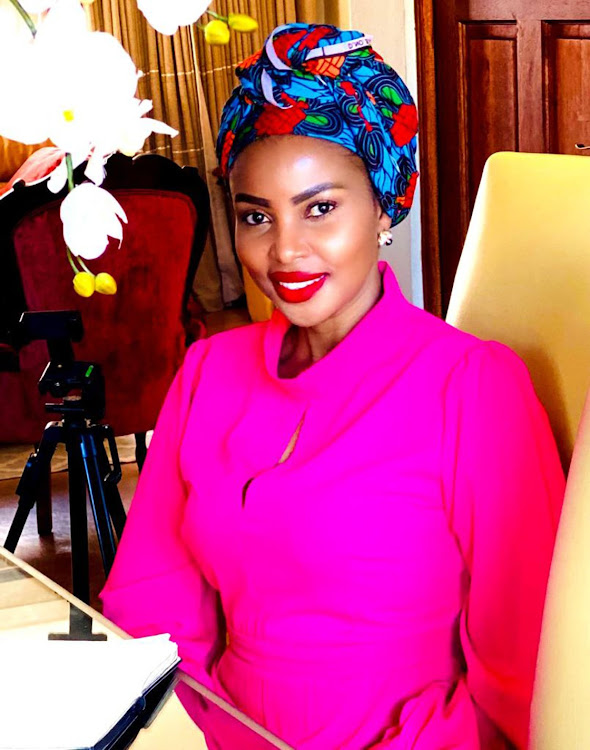 Lucia Ochan Philanthropist is a successful woman who is out to inspire women, children and the elderly.
Image: SUPPLIED

Lucia Ochan-Simelane is a business woman, philanthropist and a beauty queen.

With so many titles, you'd think she's too busy to think about other people but she is not.

Her Sewing into the Fabric of Africa, which involves recycling reusable sanitary towels and a mask project, is evidence enough.

Ochan-Simelane says the initiative is aimed at promoting sustainable development in agriculture, clothing and textile industries in marginalised communities.

"It’s the year 2020 and women and girls around the world continue to be held back because of the lack of resources for their menstruation. Periods don’t pause for the [Covid-19] pandemic," says Ochan-Simelane.

She is  determined to empower women in rural villages and neighbouring communities.

"I come from humble beginnings and because there was not much, I pushed against the odds to be a person who makes a difference and bring change in communities."

Ochan-Simelane launched the Emphakatsi-iNdlovukati (She Elephant) project, partnering with rural women to uplift, empower and develop their skills.

She says she wanted rural women to be able to start sustainable projects and businesses for the long term by assisting them to be “able to design products and still be able to sell them themselves".

Ochan-Simelane says she was also focused on creating cancer awareness in rural areas so that people can be aware of life-threatening diseases, especially as health facilities were far away for many rural people.

She is also the founder and owner of OT Deyo Med Aesthetic Clinic in Mbombela.

"I started my social entrepreneurship in 2014 with the project called Giving is Always in Style at Amazing Grace Centre for Children," she says.

Mrs Globe is an international beauty pageant held annually and is open to women aged over 25 and who are married or are parents. The pageant is heavily involved with charity work; funds are raised for the charity called Woman in Need in more than 70 countries around the world.

Ochan-Simelane is Mrs Mpumalanga 2017 second runner-up. She uses these esteemed platforms to raise worldwide awareness on work being done to advance the rights of the elderly, women and children.

Addressing issues around education, leadership, health, safety and security of the elderly, women and children – especially young girls – is close to the mother of two’s heart.

"If I put my mind to anything, I know I can do it because I fight till I get it," said Ochan-Simelane, who was born in Ermelo where she was raised among three sisters by her mother and father who respectively worked in retail and the mines.

Being one of the most influential women in SA, Ochan-Simelane stressed that she is about uplifting the community and women who want to make a difference.

“I did various projects in the community for me to be given the titles that I got over the years," she said.

In Su-yen Thornhill’s kitchen, everything comes together.
SebenzaLIVE
1 year ago

Could there have been a clue about the gender of the celeb's baby in the design of her glorious traditional outfit?
S Mag
1 year ago
Next Article