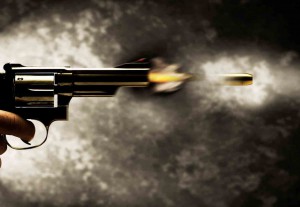 A robbery suspect succumbed to his injuries after he was involved in a shoo-tout with police in Ladysmith on Friday
Image: File

A robbery suspect has died after he was involved in a shoot-out with police in Ladysmith on Friday.

KwaZulu-Natal spokesperson Col Thembeka Mbele said officers from the Ladysmith K9 unit responded to a report of a robbery at business premises in the town.

“On arrival, they saw three men leaving the premises on foot and a chase ensued.

“Police approached the suspects near the taxi rank and shots were fired.”

Mbele said two men aged 21 and 25 were shot and injured.

“Police recovered a pistol loaded with 10 rounds of ammunition and a toy gun.

“They were both taken to hospital for medical attention where a 25-year-old succumbed to his injuries.”

Mbele said the 21-year-old was in hospital under police guard.

The three Eldorado Park police officers accused of killing Nateniel Julies acted in common purpose in an attempt to conceal the teen’s murder by ...
News
1 year ago

A shoot-out between police and suspects in Centurion on Thursday morning has left two policemen severely injured, says Netcare 911
News
1 year ago
Next Article