Cops implicated in death of Nateniël Julies had a 'hunger to kill', court hears 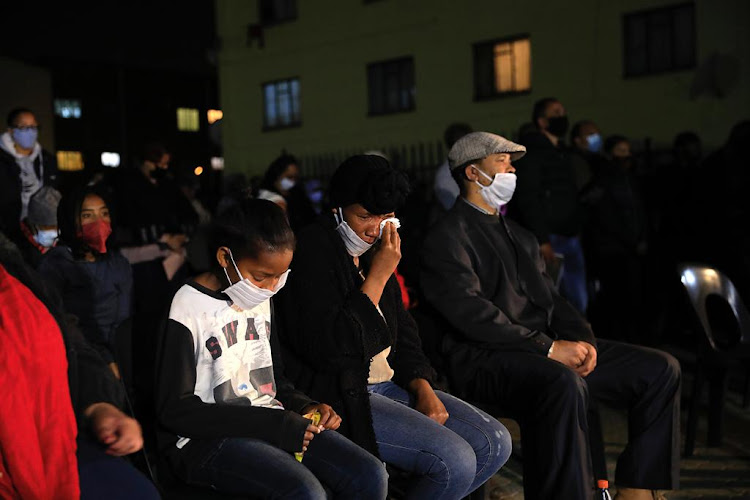 Family and friends of Nateniël Julies at his memorial service in Eldorado Park.
Image: Alon Skuy

A police officer in the Nateniël Julies case “lied” and “misled” the court into believing he had one conviction when in fact he had three, the Protea magistrate's court heard on Wednesday.

State prosecutor Mzwandile Mrwabe argued that Sgt Scorpion Simon Ndyalvane, who covered his face during bail proceedings, lied and misled the court and should not be granted bail. The state expressed concern over his release, saying  he could interfere with at least three witnesses known to him.

The National Prosecuting Authority (NPA) told TimesLIVE that these crimes were committed in Cape Town between 2010 and 2012.

It was revealed that he also has a pending case.

Mrwabe argued that Ndyalvane and co-accused Const Caylene Whiteboy “clearly had an intention to kill” when they shot Julies.

Recalling events leading to the fatal shooting, Mrwabe told the court that the pair had earlier dispersed a group of people who had been drinking alcohol, which he said was not a crime.

“They took out a firearm to disperse a group of people who were drinking, when drinking is not a crime per se. They drove away because they had not quenched their thirst of shooting ... They later shot Nateniël ... They were on a shooting spree.”

Mrwabe argued it was not in the interest of justice for Ndyalvane to be released on bail.

“He lied to you and said he has one conviction. How then are you going to trust applicant number one if he's granted bail?”

Mrwabe said Ndyalavane had “the audacity to lie” and questioned why he should be released on bail. He argued that Ndyalvane may abscond as his address had not been verified.

While the third accused, Sgt Vorster Netshiongolo, had minimal involvement in the crime, the state also opposed his bail. The court heard that Netshiongolo was off duty when the incident occurred.

The case was postponed for October 28 for bail judgment.

Caylene Whiteboy, the Eldorado Park police officer who is accused of firing the shot that killed Nateniel Julies, has told the court that she has ...
News
1 year ago

The three Eldorado Park police officers accused of killing Nateniel Julies acted in common purpose in an attempt to conceal the teen’s murder by ...
News
1 year ago
Next Article