Cape Town couple in their 90s beat Covid-19, get rousing send-off from hospital 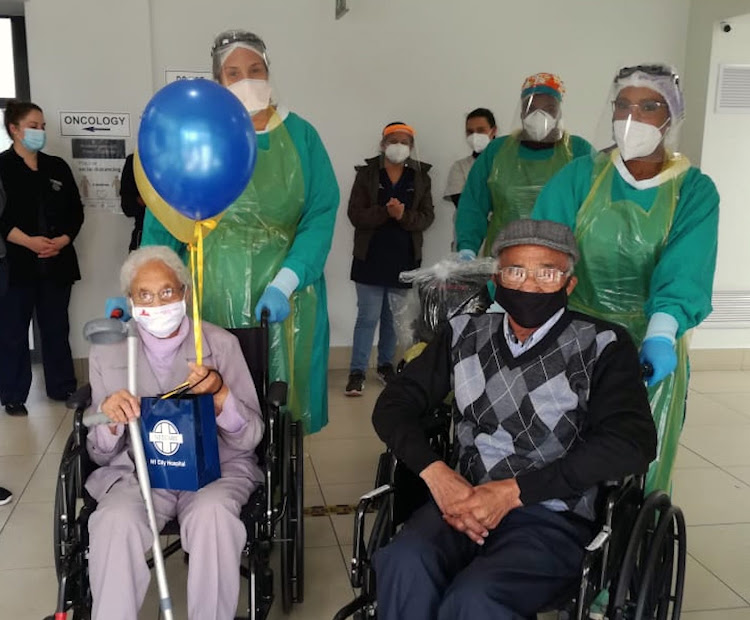 “We are going home.”

Those were the elated words of 91-year-old Neville Adams when he and his 90-year-old wife Iris were discharged from the Netcare N1 City Hospital in Cape Town recently after they both survived Covid-19.

They were  admitted on August 16 and 21 respectively, with neither aware at first that they were a room away from each other.

“Mr Adams was astonished and excited to learn that his wife was also admitted with him, doing well in her recovery and being cared for just next door,” said physician Dr Zia Els. “Given their age and that both have underlying medical conditions - Iris has diabetes and hypertension and Neville has kidney problems - we were deeply concerned about them when they were admitted.

“I am delighted to say, however, that they both did remarkably well and are continuing to recover strongly at home after being discharged," said Els.

Els said Iris was admitted with similar symptoms to her husband and both were initially dependent on oxygen.

“Mr Adams also had to spend the first few days in the high-care unit of the hospital. The team treated them conservatively, using less-invasive ventilation techniques, to which they both responded well.”

Adams said he was relieved that they had both survived the virus.

“We had quite an experience but are both feeling much better now. The doctors and staff at the hospital treated us exceptionally well and we are deeply grateful to all of them.”

The hospital's acting general manager, Morné Kielblock, said staff gave the couple a rousing send-off with a “guard of honour”.

“Under the watchful eye of our outstanding medical and nursing teams, both these senior citizens survived the virus. It was a great privilege for us to treat such a brave couple and a morale booster for all of the doctors and staff to be able to send them home safely,” he said.

The department of education has sent a team of counsellors to support the Ethembeni Secondary School community in Burgersdorp in the Eastern Cape ...
News
1 year ago

The number of pupils who tested positive for Covid-19 at an Eastern Cape school has risen from 98 to 102, with one teacher also testing ...
News
1 year ago
Next Article