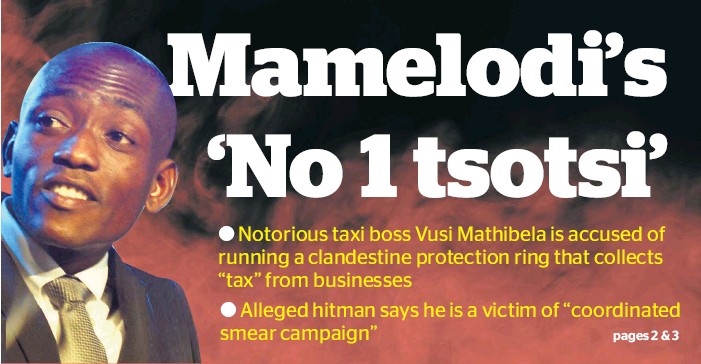 The name Vusi "Khekhe" Mathibela is one that has been well known for years in Mamelodi, Tshwane but it wasn't until the murder trial of businessman Wandile Bozwana that more South Africans found out about this character.

In October, 2015 Wandile Bozwana, a North West businessman, was killed in a hail of bullets on the Garsfontein Road exit from the N1 highway in Pretoria. He was shot nine times and died at Unitas Hospital later.

The shooting was believed to be a hit as he was involved in controversial tenders with North West government. He also spoke openly about government corruption in that province.

Bozwana's company, Tsoga Developers, was embroiled in a court case with the North West government after the government took Tsoga to the Constitutional Court over the building of a hospital in Brits.

Mathibela got a R50000 bail while the other three are still behind bars.

North West businessman Wandile Bozwana, who was assassinated in Pretoria on Friday, has been hailed as an "unsung ...

A KwaZulu-Natal taxi boss is being sought by the Hawks in connection with assassination of businessman Wandile Bozwana. ...

While Khekhe was still out on bail in the Bozwana case, group of business people in Mamelodi, who were tired of living in fear, came forward and spoke to the Sowetan.

They accused the 32-year-old taxi boss of running an extortion ring in the township east of Pretoria which forces local entrepreneurs to pay him a "protection fee".

Although Mathibela strongly denied the claim, local business people painted a picture of a modern-day Al Capone whose sidekicks move around the collecting money from them.

According to those who knew him from his early days, Mathibela dropped out of high school to become a taxi driver. He rose through the ranks and now owns more than a dozen taxis.

His late father was also a prominent taxi owner.

Mathibela is also a nightclub owner who is already listed as a director of four companies.

The name Vusi "Khekhe" Mathibela strikes fear in the hearts of many taxi operators and business people in Mamelodi.

A Mamelodi businessman fled the township after being shot for allegedly refusing to pay alleged enforcer Vusi "Khekhe" ...

Vusi Mathibela and his business associate Elias Skhosana are concerned about allegations.

In February 2019, Police minister Bheki Cele attends a community imbizo where residents call for the arrest of the notorious taxi boss.

"You guys spoke about him when you came here to unveil the new provincial commissioner three weeks ago. You said you needed three months and you would solve him. Three months is too long, we won't wait that long because we know who he is," one community member said..

Cele vowed to bring an end to a Mamelodi controversial taxi boss' reign of terror.

In March, Cele dropped a bombshell when he announced that the police were looking for Mathibela.

A total of six people associated with Mathibela appeared in two different courts on charges of extortion, intimidation and being in possession of firearm while he remained a wanted man.

Police minister Bheki Cele has vowed to bring an end to a Mamelodi controversial taxi boss' reign of terror.

Bheki Cele dropped a bombshell when he announced that the police were looking for notorious Mamelodi taxi boss Vusi ... 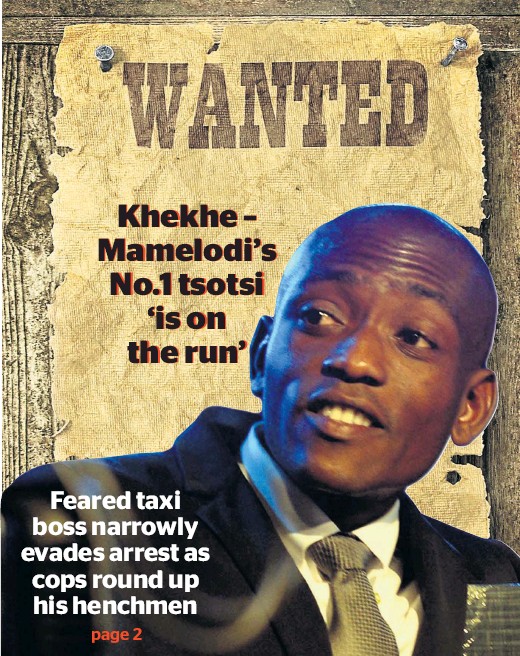 A few days after the arrest of his henchmen, Khekhe handed himself over to the police.

Police spokesperson Brigadier Vish Naidoo said Mathibela handed himself over to the police in Germiston, east of Johannesburg.

Mathibela was apparently paraded in handcuffs, in the township he had allegedly terrorised for years, by police officers following his arrest. This was seemingly to show locals that Mathibela was finally tamed.

Community members, who witnessed the incident, claimed Mathibela was shoved around in full view of the locals who once feared him.

The once feared Mamelodi taxi boss, Vusi Mathibela, was reduced to a laughing stock.

Mamelodi’s number one tsotsi Vusi “Khekhe” Mathibela claims to have been assaulted by police officers after he was ...

Mathibela was arrested while preparing to go on a holiday to Dubai despite his bail conditions preventing him from leaving the country.

In addition, Mathibela had spent four days in Malawi while out on bail for his alleged involvement in the murder of North West businessman Wandile Bozwana.

Prosecutor advocate Andre Fourie told the North Gauteng High Court in Pretoria yesterday that Mathibela was arrested while preparing to go on holiday to Dubai on March 13.

Mathibela's lawyer Annelene van den Heever told the court that Mathibela had complied with his bail conditions, including handing over his passport and a title deed to his property.

She said following arrangements between a police captain and his lawyer, Mathibela was given his passport to travel on October 25 last year.

"The accused [Mathibela] travelled with his family to Mauritius on a family holiday... his lawyer Mr Mkhabela spoke to Captain Xulu about the accused needing to travel and his passport was handed back to him," Van den Heever said.

Xulu was initially part of the police's investigating team into the murder of Bozwana.

Xulu maintained that he was never in possession of Mathibela’s passport and that the 33-year-old taxi boss had not handed over his passport and title deed as per his bail conditions.

Mamelodi's feared taxi boss Vusi Mathibela was arrested while preparing to go on a holiday to Dubai despite his bail ...

Lawyers for Mamelodi's notorious taxi boss Vusi "Khekhe" Mathibela are arguing in court that police gave him his ... 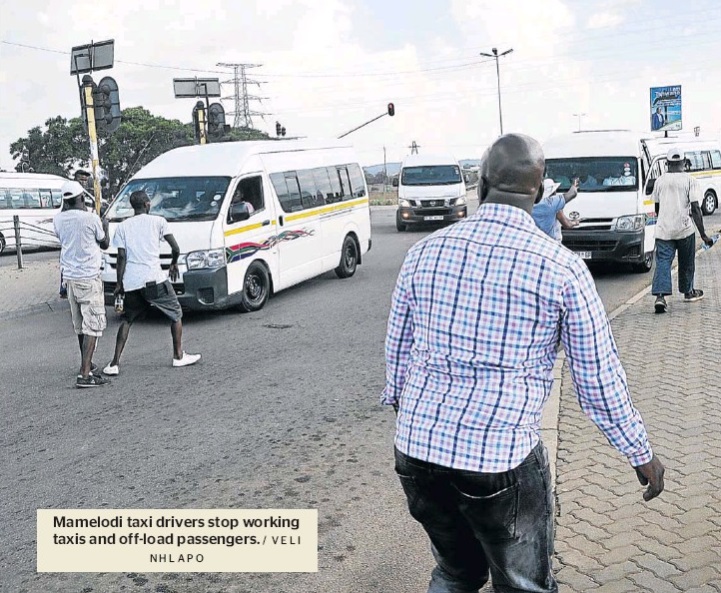 On 19, March 2019, Mamelodi was brought to a standstill when dozens of taxi drivers belonging to the Mamelodi Amalgamated Taxi Association (Mata) blocked the road next to the Denneboom taxi rank in protest over the "illegal fees" they paid to Mathibela through their association.

About 100 drivers stopped other taxis from operating and barricaded the road with refuse.

A taxi driver affiliated to Mamelodi Taxi Association, who asked not to be named, said they were frustrated because they were still paying "extortion fees" for operating in the township.

Mathibela, along with his two co-accused Elias Skhosana and Stemmer Monageng, had charges of extortion, intimidation and assault withdrawn against them in the Pretoria Regional Court on May 7, 2020.

National Prosecuting Authority (NPA) spokesperson Phindi Mjonondwane told Sowetan that Mathibela, Skhosana and Monageng were let off the hook after witnesses in the case refused to co-operate with authorities.

Mamelodi East comes to a standstill as taxi drivers take to the street ...

Feared Mamelodi taxi boss Vusi "Khekhe" Mathibela is in a bid to get his freedom after charges of extortion against him ... 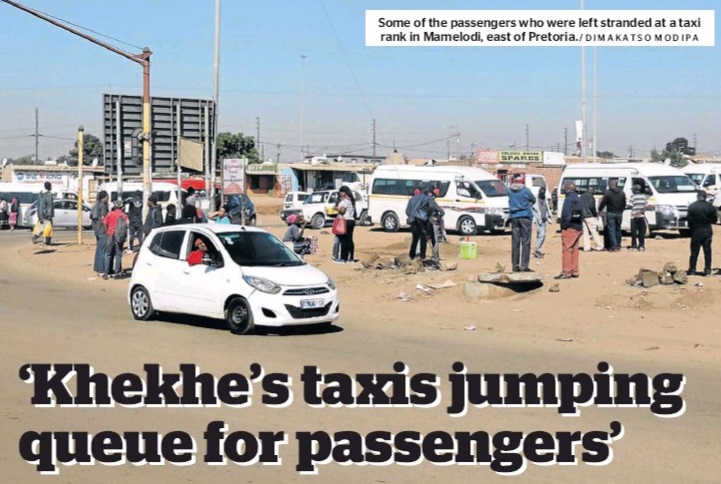 This is how technology caught calls made by Bozwana's alleged killers

A police cellphone expert established that there was communication between four men accused of murdering North West ...

Another stab at seeking bail

The man dubbed Mamelodi’s “Number 1 Tsotsi”, Vusi "Khekhe" Mathibela, says the state has no evidence linking him to the murder of North West businessman Wandile Bozwana and wants to be acquitted from all charges.

This came out during closing arguments in the North Gauteng High Court in Pretoria yesterday where Mathibela stands accused of the 2015 murder of Bozwana and attempted murder of his business partner Mpho Baloyi.

The man dubbed Mamelodi’s “Number 1 Tsotsi”, Vusi "Khekhe" Mathibela, says the state has no evidence linking him to the ...