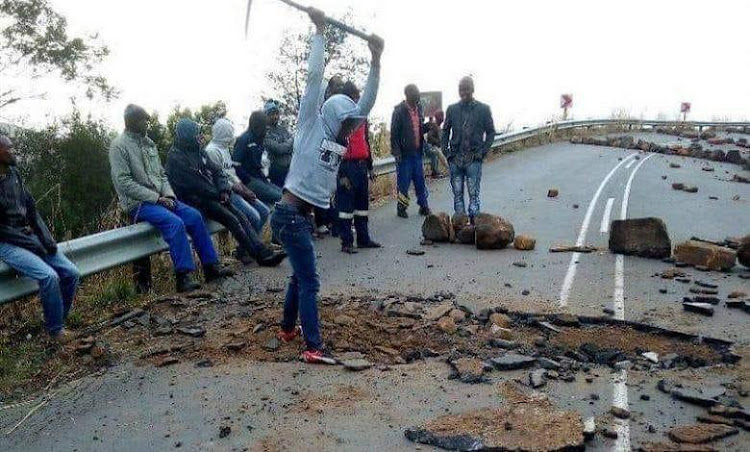 Pictures showing protest activity in Pomeroy, KwaZulu-Natal, were being shared on social media on Tuesday, as frustrations over water and electricity boiled over.
Image: Supplied

Four years of frustration over the lack of water and electricity for a northern KwaZulu-Natal community reached a climax this week when residents dug up the road in protest.

The community of Pomeroy has been submitting memorandums to the government and embarking on protests over the provision of water and electricity - but to no avail.

On Tuesday, residents blocked the R33 and began to dig up the road. They said they were tired of raising the same concerns with the Msinga local municipality and the Umzimyathi district municipality.

A member of the community who took part in infrastructure destruction spoke to TimesLIVE on condition of anonymity.

"We get water from the river and women have to go very early before the animals. It is not safe as there is a forest between the village and the river. During lockdown our children couldn't get lessons via phones, laptops or television because we don't have electricity," they said.

A mechanical fault caused a bus to catch alight outside a school on Inanda Road in Durban on Monday morning.
News
1 year ago

The resident, who was part of the protest which saw the road being dug up, justified the action.

"We have been promised [services] for years. New villages have been provided with water and electricity, but not us. Today the police came and shot at us. If it means we have to be shot to get basic services, so be it," the resident explained.

An ally of the protesters, UDM provincial secretary Boyse Gumede, told SowetanLIVE's sister publication TimesLIVE that the lack of water and electricity in the area has been raised with the Human Rights Commission (SAHRC) and the KZN cooperative governance and traditional affairs (Cogta) department but there had been no progress.

He condemned the destruction of infrastructure, however.

"I understand the frustration of the community; it has been four years of a struggle for water and electricity. But I would like to appeal to the community to use existing structures, like the committees we established, to put pressure on the government," said Gumede.

He anticipated that protests would  continue until the people are "heard".

"All the people are asking for is engagement, to be listened to and engaged with," said Gumede.

A memorandum sent to the speakers office at Umsinga municipality on September 15, which TimesLIVE has seen, states that there had been "attempts to get this resolved", including protests in "Pomeroy, Gordon, Ndanyane and Tugela Ferry, referring the matter to the South African Human Rights Commission and Cogta KZN".

"Water provision plan to be planned according to the Water Services Act and be made available to the public," the document reads.

In the memorandum, the community threatened to shut down all operations and movements in and out of Msinga on Friday September 25.

"Ongoing protest on every 15th and 25th of the months to follow, until the SAHRC and Cogta attends to the matter and report back within seven days, failing which the protest action will continue," the memorandum says.

Senzo Mzila, spokesperson for KwaZulu-Natal Cogta MEC Sipho Hlomuka, said the memorandum was received by the department and is being processed by officials for the attention of the MEC.

Three killed as car crashes into tree, breaks in two

Seven people were killed and three others injured in a head-on collision on the D19 road outside Seshego in Limpopo on Sunday morning.
News
1 year ago
Next Article