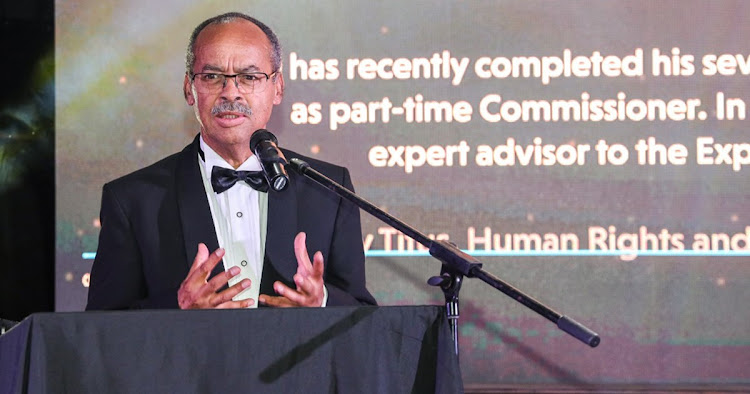 A former commissioner of the SA Human Rights Commission, Danny Titus, has died at the age of 63.

The commission said Titus died on Friday, after being in a coma since undergoing eye surgery in July.

He is survived by his two daughters, Daléne and Neriska, who shared their memories of their dad, praising him for being a devoted family man in addition to living a life worthy of being emulated, describing him as “kind, intelligent and generous”.

The commission said his former colleagues “will forever remember him as an empathetic, personable, passionate advocate of human rights, particularly the rights of marginalised people”.

“Beyond his work in human rights, Dr Titus is remembered as a historian, linguist and academic, having served as the executive director of culture at the Afrikaans Language and Cultural Association (ATKV) up until May.”

Dad, you were the best of us all. Thank you for being such a good father, leader and man of God. You taught us morals...

She added, “We will miss you, and bid farewell to you with great respect and much gratefulness for the difference you made and the lives that you touched.”

Born in Worcester, in the Western Cape, Titus, graduated with a BA LLB in 1982 and was admitted as an advocate of the supreme court in 1983. He studied at the Rijksuniversiteit, Leiden, The Netherlands, where he gained a doctorate on the applicability of the international norms of human rights to the SA legal system, with specific reference to the SA judiciary.

He returned to SA in the early 1990s, during the country's transition to a constitutional democracy. He undertook human rights work at the Law Commission before becoming the executive director of the Goldstone Institute (now the Human Rights Institute of SA).

Titus joined the SAHRC for a seven-year term in 2009.

To the greatest man and father. Thank you for all the unconditional love that you gave to your family and the world....

In 2012, Titus led and completed the investigation into the 2011 killing of Andries Tatane, an activist from Ficksburg in the Free State. Said the commission: “The investigation led to the initiation of a fruitful relationship with the SA Police Service and improved training of police officers in managing and regulating gatherings to ensure more peaceful and non-violent protests.”

Titus also led national hearings on access to basic services, land, and the constitutionality of indigenous groups in SA, particularly the Khoisan communities (Khoi, San, Nama, Griqua, Koranna) and he was appointed to the UN Expert Mechanism on the Rights of Indigenous Peoples. He advocated too for improved safety and security for farming communities. In 2014, he led a national investigative hearing on the safety and security challenges in farming communities and released the subsequent report on the hearings to parliament in 2015.

Titus was honoured in February this year as a recipient of the freedom of the town, during the bicentennial celebration of his birth town, Worcester.