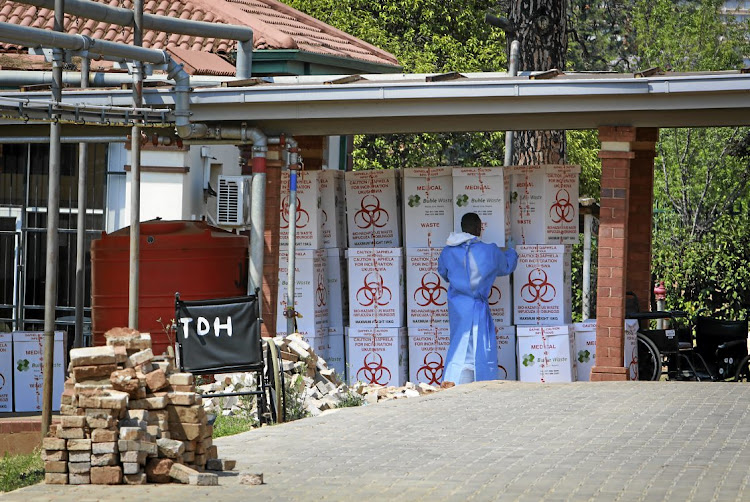 Boxes of medical waste stacked up along a corridor at the Steve Biko Academic Hospital in Pretoria on Saturday.
Image: Sebabatso Mosamo

A medical waste contractor temporarily suspended services at 32 clinics and hospitals across Gauteng last month over a payment row - and yesterday scores of boxes of hazardous waste were still piled up at the Steve Biko Academic Hospital in Pretoria.

The three-day interruption in removal of the hazardous waste came after the contractor, Buhle Waste, gave the Gauteng department of health a two-day ultimatum on August 12 to pay outstanding bills of more than R18m.

Buhle Waste, which is among 40 Gauteng companies whose bank accounts were frozen after being linked to a personal protective equipment (PPE) scandal in the health department, said it suspended its services on August 14. It resumed removals after the department appeared to realise the urgency of the matter.

But photographs taken on Saturday and seen by the Sunday Times show scores of boxes of biohazardous medical waste stacked outside the Covid-19 ward of the Steve Biko Academic Hospital in Pretoria.

It has also emerged that medical waste was dumped in the suburb of Capital Park, which is close to the Steve Biko Academic Hospital and the Tshwane District Hospital, at the end of August.

Neither Buhle Waste nor the Gauteng health department would say if the boxes at the Steve Biko Academic Hospital contained Covid-19 waste.

The Gauteng acting MEC for health, Jacob Mamabolo, said he would visit the hospital to find out what was going on.

"I commit to physically visiting the site to gather the facts to hold those responsible to account, whether it's officials or service providers."

Buhle Waste business development manager Thabang Sekete told the Sunday Times his company had been forced to act as it did because it was accruing costs and owed substantial amounts to creditors who were threatening to take legal action.

"Once we informed the department we would suspend services, [it] sprang into action to generate purchase order numbers and process payment," he said.

Services resumed on the understanding that invoices would be paid within 30 days. But "we are yet to see progress in this regard", Sekete said.

He did not respond to questions about the boxes of uncollected waste stacked at the Steve Biko Academic Hospital - which carry the Buhle Waste logo.

Gauteng health department spokesperson Kwara Kekana said an inspection of financial records from August showed that the Steve Biko Academic Hospital owed Buhle Waste just under R511,000. The invoice had now been processed and would be settled in the next payment run.

The balance of the R18m owed to Buhle was based on outstanding amounts from other hospitals and contracts with the department dating from 2018, she said.

"Nonpayment was due to the delay of issuing of purchase orders and [valid] receipt vouchers by various hospitals," Kekana said.

"The records indicate that only Covid-19 payments have not been settled, on instruction, as Buhle Waste is part of the ongoing SIU [Special Investigating Unit] investigation. Any other disputes relating to their account, the service provider can contact the department."

Kekana said 32 hospitals were affected by Buhle Waste suspending its service and that medical waste collections from Steve Biko Academic Hospital were interrupted for three days.

She denied medical waste had been left unattended at the hospital, but did not comment on the photographs taken on Saturday.

Kekana also did not respond to questions about the medical waste found in Capital Park.

According to the guidelines released by the national department of health in March, medical waste from Covid-19 patients must be labelled with the relevant biohazard symbols and marked "coronavirus" or "Covid-19". Only an appropriate, qualified service provider may collect, transport, treat and dispose of it.

Another service provider, Compass Medical Waste, is also threatening to suspend its services if the provincial department does not pay debts of almost R3m.

Company MD Ian du Randt said he had given the department until the end of September to settle its bill or face a suspension of services.

"Any decision to suspend services is not taken lightly but only as a last resort once all other avenues have been exhausted."

Du Randt said Compass had a long history of carrying the department's debt, despite having years ago extended its credit terms beyond the regulatory 30 days to 45 days.

Buhle Waste has been linked to a PPE contract the Gauteng health department awarded to Ledla Structural Development. The SIU has called the contract unlawful, irregular and corruptly awarded.

Some of the money paid to Ledla is believed to have ended up with Buhle Waste via a company called Mediwaste.

Sekete said the SIU had not interviewed any Buhle Waste staff about the PPE scandal. "Buhle Waste and Mediwaste have a long-standing commercial relationship. They are a manufacturing firm from whom we procure consumables," he said.

Respected SA Rugby board member Monde Tabata has died due to Covid-19-related complications.
Sport
1 year ago

Take our SME survey with R250,000 in ads up for grabs for your business