A baby who was born prematurely in May and classified as a miscarriage was due to go home on Saturday after 116 days in hospital. 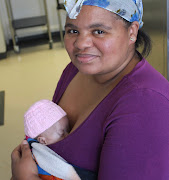 Image: Supplied Baby Grace and her mother Jacqueline ready to be discharged.

“I initially said goodbye to Grace after birth as she was classified as a miscarriage being so early and not breathing directly after birth,” said her mom, Jacqueline Petro.

The medical team at George Hospital in the Western Cape did not give up and worked hard to save Grace.

After counselling and some sleep, Jacqueline was informed of the miracle that her baby was breathing.

“All I could do was cry. I was in total shock,” said Petro.

But her optimism was short-lived, as doctors informed her seven days later that her baby was not going to make it.

“I told the doctor to give me my baby and I put her on my chest and told the Lord that if He wants to take her, He needs to do it now, because He won’t have this chance again tomorrow,” she said.

Petro has had a rough few months. She also broke her ankle in July 2020 and had to be operated on. “This year has been tough, but I am grateful for all the good that has happened,”   she said.

As Grace was discharged on Saturday, Dr Ilse Els, head of the neonatal ICU at George Hospital, said her chances of survival had been less than 20%.

“Gracie survived so many challenges. She had been a little star patient from the beginning and took every challenge in her stride. Her survival is a testimony to the value of the three pillars of good basic neonatal care: a warm incubator combined with kangaroo care, safe oxygen therapy with high-flow nasal cannula oxygen, and breast milk.

Image: Western Cape government Grace Petro this week, shortly before she was discharged from George Hospital 116 days after her birth.

“This, wrapped in a care package of dedicated nursing and medical staff, and then a little fighting spirit in a 500g fighter.

“Her road ahead is long; we will continue to walk the road with her with follow-up appointments at our high-risk clinic and with the help of our occupational therapy team, led by Desiree van der Vyver. We salute you, little one. Your fighting spirit kept us fighting through the difficult Covid-19 times,” said Els.

Grace has a nine-year-old brother who eagerly awaits her homecoming. “There are so many people who can’t wait for Grace to come home,” said Petro.